This is one of the most amazing short animal stories for kids. Once upon a time, in a jungle, a rabbit slept soundly under the shade of a mango tree. It was a beautiful day, the sun was shining and the birds were chirping. Suddenly, a strong gust of wind shook the mango tree. A loud thud made the rabbit jump to its feet. You may also like to read, A Wise Parrot.

The poor rabbit had always had nightmares and often believed in evil spirits. This time the rabbit was sure something ominous was happening. “Oh, fell?” he looked around but found nothing. The rabbit decided the sky must be falling. Without any delay, he began running away. “Run! Run!” he screamed as he ran, warning anyone who would lend an ear, “The sky is falling run!” 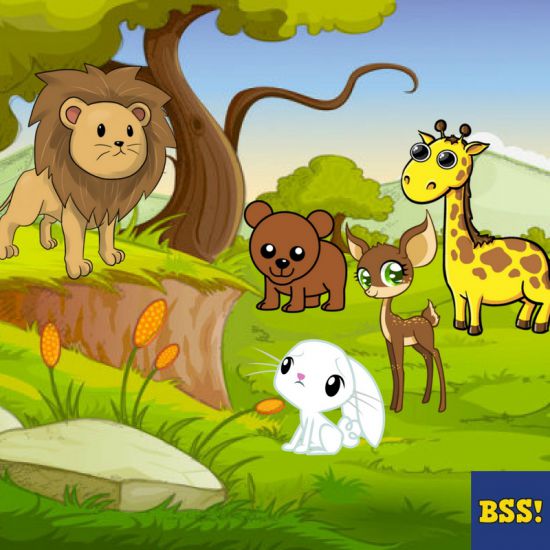 On his way, the rabbit ran into a deer. When the deer saw the shaken up rabbit she couldn’t help asking, “What is the matter rabbit?” The rabbit huffed and puffed, as he was out of breath before answering the deer. “The sky… it’s falling down! Run!” the rabbit warned the deer and continued running.

The deer soon followed. On their way, they ran into yet another animal. This time it was a giraffe. Upon looking at the frightened rabbit and deer, the giraffe too asked the same question as the deer. The rabbit repeated his warning and continued running as fast as his tiny feet could carry him.

Soon, many other animals had started following the rabbit. The rabbit had run into many animals in the jungle when he was trying to run away. “Run! Run for your life everyone, the sky is falling down!” the rabbit continued repeating. Also, read The Clever Jackal.

Meanwhile, a lion had taken the opportunity of the beautiful day, to sleep peacefully. All the screaming and shouting awakened the lion and put him in a bad mood. The lion came out of his den, to see what the commotion was about. He was surprised to find a horde of various animals running mindlessly.

“Stop!” roared the lion. At once, all the animals came to a sudden stop. “What is the matter with you all? Why are you running?” the lion inquired. “The sky is falling down,” the rabbit answered, still shaking with fright. “I suggest you too to run for your life!”

The lion could not stop his laughter after hearing such a ridiculous thing. He laughed and laughed, he laughed until tears came out of his eyes. “The sky is falling down, you say? Who has seen it, tell me?” the lion asked. Everyone started asking around.

In the end, it turned out that the fallen piece of the sky was nothing but a mango that fell from the tree. “Is this the fallen piece of sky, you were talking about?” the lion asked the rabbit, pointing at the mango. The rabbit realized he had made a grave mistake.

“Well, you see when I was sleeping under the tree I was dreaming of the sky. A loud thud made me jump to my feet. I was scared and I thought, the sky was falling down,” the rabbit said. He hung his head, ashamed. Also, read The Horse And The Donkey.

“You foolish rabbit made everyone run around when you yourself were not sure of what it was?” the lion asked the rabbit. Then he said to the other animal, “This is what you get for blindly following others.” Later, all the animals dispersed and went about as they usually did. The rabbit never repeated the same mistake ever again.