This is one of the best short panchatantra stories for kids. Once upon a time in India, there lived a poor weaver. Now, this weaver did not have many helpers, so he had to do all the work by himself.

One day, as he was weaving, his weaving frame broke. The poor man became sad and went to the woods nearby. There he looked at the trees and decided on one of them, to cut up. Just as he was preparing to chop the tree, he heard a voice, “Halt!” You may also like to read, A Foolish Tortoise. 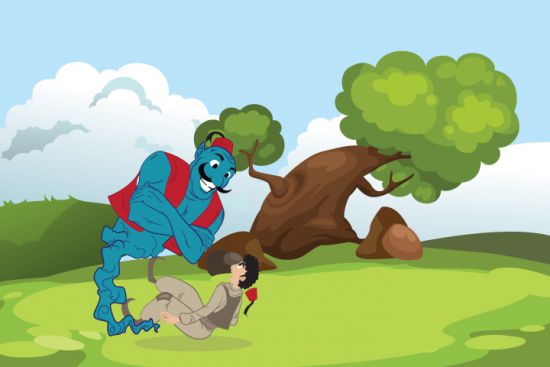 Image Source@ momjunction.com. The weaver turned around and found a genie swirling in the air. “Don’t cut this tree,” the genie said. Now, the poor weaver had to cut it because if we did not chop that tree, there would be no weaving frame. And if there was no weaving frame, the weaver and his family would starve. So, the weaver told the genie about his reasons for chopping the genie.

But the genie then told the weaver that the tree he was going to chop was his home. And if the weaver did so, then the genie would become homeless. After much discussion, the genie then suggested, “Would you stop if I grant you a wish?” Now, the weaver had no idea what to ask for. So, he asked the genie if he could take the advice of his family or friends. The genie agreed.

The weaver hurried back. “My wife would probably have a better idea. And we may be able to use this chance to make our lives better,” the weaver thought. But little did he know that his wife was even dumber.

When the weaver narrated the entire incident, the wife instantly told him to ask for more pairs of hands and more pairs of legs. Her logic was that these new pairs would help the weaver do his work faster. So, the foolish weaver hurried back to the genie and he repeated what his wife had advised him. Also, read The Fox And The Goat Story.

The genie granted the weaver his wish. As a result, the weaver had many hands and legs. He hurried back to his village. But when the people saw the weaver, they thought that he was some monster. They beat him up with axes and sticks. And very soon, the weaver lay dead.