The Fountain Of Youth Story

This is the Fountain Of Youth Story for children.  Long, long ago, there lived an old man and his wife in the mountains. The old man was a woodcutter and the old woman worked around the house.  Both of them had spent many happy years together. Unfortunately, they did not have any children. As they were getting old, they were afraid that death would separate them. Also, read The Origin Of Star Apple.

One day, the old man went to the forest to collect some woods. But he was lost in the woods. After searching the way for many hours, he became tired and thirsty. Soon, he found a spring in the woods and he immediately drank the water from the spring. When he saw his own reflection, he was shocked. To his astonishment, he was now young again! He was looking like a twenty-year-old boy. He realized that he had found the spring of youth! 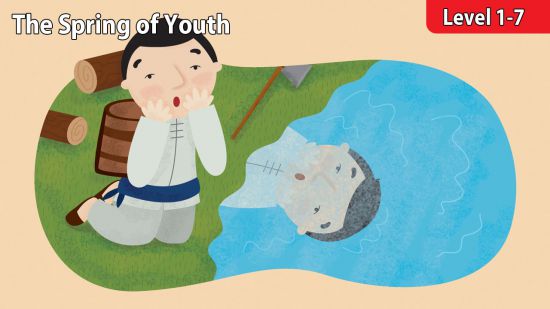 Immediately, he ran to tell what had happened to him. At once, his wife could not recognize him. “Look, I am young again!” said the old man. His wife was very surprised as she saw him. “Where is the spring?” she asked, “I want to drink from it!” The man told her the way to the spring. Since the old lady wanted to become young again, she left the place in a hurry.

A few hours later, his wife was not home. “Where is she? I must find her,” he thought. When he reached the spring searching for his wife, he found a baby next to the spring. “Oh no, This is my wife!” he thought. The woodcutter realized that his wife had drunk too much of the magic water. He took the baby back to his house and brought her up with love. The woodcutter and the baby lived happily for many more years. You may also like to read, The Legend Of Pineapple.

Here is a visual depiction of “The Fountain Of Youth”. See the video story below,

The Fountain Of Youth Story Video