The Fox And The Pheasants

This is one of the fable stories about animals for children. Long, long time ago, there lived a wicked Fox in a forest. In the evening time as Master Fox was taking his usual stroll in the woods, he saw a number of Pheasants perched quite out of his reach on a limb of a tall, old tree. He drooled and could not control himself.

The fox was very cunning and he wanted to eat all of them.  Soon after, he got an idea to get the Pheasants. The wicked Fox soon found a bright patch of moonlight where the Pheasants could see him clearly. The Fox raised on his hind legs and began to dance. Also, read The Fox And The Sick Lion. 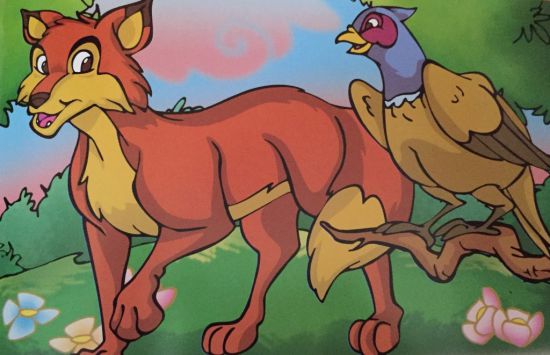 At first, he twisted round and round like a top, then he jumped up and down, cutting all sorts of strange capers. The Pheasants looked at the Fox giddily. They could hardly even think of blinking their eyes. They did not want to miss any of his single moves. The Fox captivated their attention and they could not take their eyes off him.

Now the Fox pretended as if he was climbing a tree and he fell over and lay still. He was playing as a dead creature. But in no time, he immediately jumped up on all fours, his back in the air, and his bushy tail shaking so that it seemed to throw out silver sparks in the moonlight. All of this was the part of his performance.

By this time, the poor Pheasant’s heads were in a whirl. Their heads were whirling so badly that if they have to focus on him again, they knew they would fall. But the Fox was aware of this. And so, he began his performance all over again. They became so dazed that they lost all of their control on the limb, and fell down one by one to the Fox.

The Fox without thinking even once pounced on them and ate them one by one. That night, he enjoyed his feast a lot. You may also like to read, The Fox And The Crow.

MORAL OF THE STORY: TOO MUCH ATTENTION TO DANGER MAY CAUSE US TO FALL VICTIMS TO IT.

Here is a short visual depiction of one of the fable stories about animals “The Fox And The Pheasant”. See the video story below,