The Fox and the Pig

This is one of the awesome moral short stories for children. Once upon a time, in a jungle, a fox came to a river. The fox had to get to the other side of the river. “I think I’ll simply have to swim across,” the fox thought.

Now, the river had been flowing extremely fast. At first, the fox was scared to step in the water but then he had no other choice. The fox tried to swim along with the heavy current, but the current proved too strong for the fox, who in the end drifted away with the water current. He could not move at his own will, he went along bumping here and there, tumbling and hitting on to rocks and pieces of wood. The poor fox barely managed to keep afloat. He almost drowned once or twice. 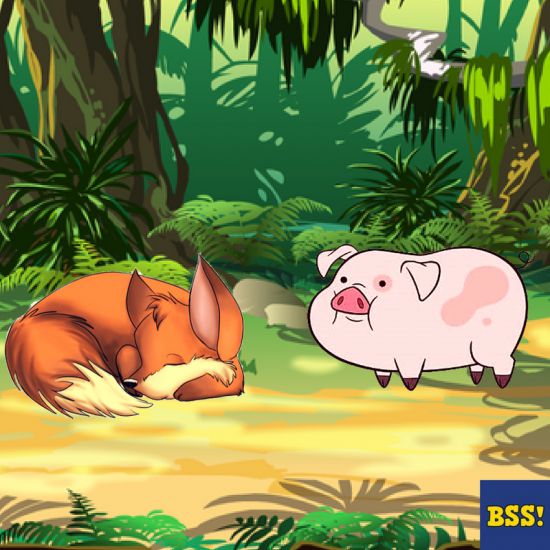 Finally, the angry river with its fast and strong currents spat out the fox into a ditch nearby the shore. The fox coughed up some water and lay still. All the bumping and smashing into rocks had worn him out. He had also hurt his foot in the process. Ever since he was thrown out of the river, the bleeding did not stop. Too much and too much hunger had drained his energy. Unable to move, he just lay there in the very same spot. Also, read Three Butterflies Story.

After some time, a pig who had been passing by and had rushed over to the fox’s side after seeing his injury. “Oh poor fox,” he says to the fox, “you must be in tremendous pain.” The fox replies, “Yes, it hurts a lot. I am hungry as well.” “I can help you,” the pig says, after seeing the flies swarming around the fox’s open wound. “How so?” asks the injured fox, desperate” for help.

“I can chase these flies away,” the pig suggested. “They are sucking your blood, it must be painful for you. If I do that, your pain will reduce considerably.” The fox refuses. “Why are you refusing? It will only help you in the end!” the pig says. “But it would only make it more painful for me,” the fox tells the pig. Upon seeing the confused look on the pig’s face, he explains further, “You see, these flies are already full with blood. These flies aren’t hurting me much, but after you drive these away new flies will come. And the ones that will take their place will drink more of my blood, which will be worse for me. Thank you for offering help, you are too kind. But I am fine the way I am.” You may also like to read, The Deer Who Played Truant.

LESSON OF MORAL SHORT STORIES: THINK CAREFULLY WHEN HELP IS OFFERED, YOU MIGHT NOT NEED IT.