This is the story of The Frog Prince. Once upon a time, there lived a beautiful princess. One day, while she was playing with her favorite golden ball, she threw it too far and it fell into the palace well. She cried thinking about the water was too deep for her to find the golden ball.

A frog nearby heard the princess crying. He told her that if he found the ball for her, she should take him back to the palace with her. She should love him, let him eat from her plate, and let him sleep on her bed. 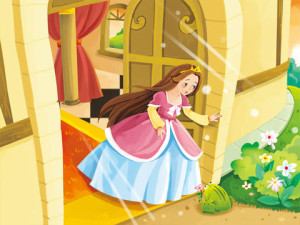 The princess agreed but as soon as she got her ball, she grabbed it and ran away. The frog went to the palace and called for her. The princess told her father everything that had happened. Her father asked her to keep her promise.

As soon as the frog saw the princess, he began croaking happily. He ate from her plate and also slept on her bed. She hated to have a frog around her but she slowly began growing fond of the frog.

Then, one morning when the princess woke up, she saw that in the place of the frog, there was a handsome young prince. The prince thanked her and explained that a witch cursed him. He would have to live like a frog till he met a kind girl who would love her, let him eat from her plate, and sleep on her bed.

Very soon, the frog prince and the princess were married and ruled their kingdom for many years.

Here is a short visual depiction of one of the most famous short stories for kids – “The Frog Prince“. See the video story below,