The Frog Whose Belly Burst

This is a short funny story for kids to read online. One day, a baby frog was playing in a grassy field when all of a sudden he saw a cow. When the baby frog returned, he went to his father and said, “Daddy, I saw a terrible monster. He is as big as the mountain. He has horns on his head and he stands on four feet.” The father frog answered, “My son! It’s an ox who stays on the farm!” “I have never seen such a terrible monster before,” said the baby frog. Also, read The Donkey In Lion’s Skin. 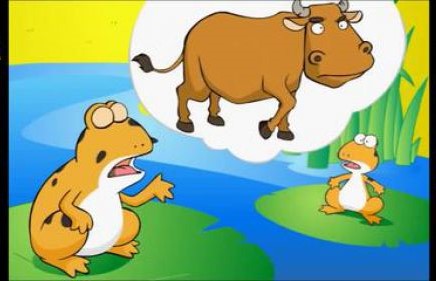 The father frog took in more air and not only his belly but also his whole body grew much bigger. “Was he as big as this son?” The son replied, “No! Much bigger than that!” Also, read The Strange Egg.

In order to make his body larger than the ox and show it off, the daddy frog took in as much air as he could using all his energy. “Probably an ox was not as big,” he stammered. Bowwww! Bang! His belly burst before he could finish his remark. “Oh, my stomach! My poor stomach! Ahhhh!” the father frog cried. “Oh, daddy!” cried the young frog.

Here is a visual depiction of a short funny story for kids, “The Frog Whose Belly Burst”. See the video story below,