The Goat Who Saved The Priest

This is one of the best Buddha stories with morals for kids. Once upon a time, long ago, when animal sacrifices were quite popular, there lived a priest. Just as many before him, this priest believed that beheading one or some animals as a sacrifice was a good deed. So, he gathered the required number of goats for a sacrifice.

Before the goats could be beheaded, he thought they should have a bath. So, he ordered some servants to take the goats to the holy river. On their way to the sacred river, one of the goats suddenly realized something. You see, this goat had been a priest in a previous life a long time ago. And he too had beheaded many animals as an ignorant sacrifice. He had truly believed that God wanted their heads. Also, read The Banyan Deer. 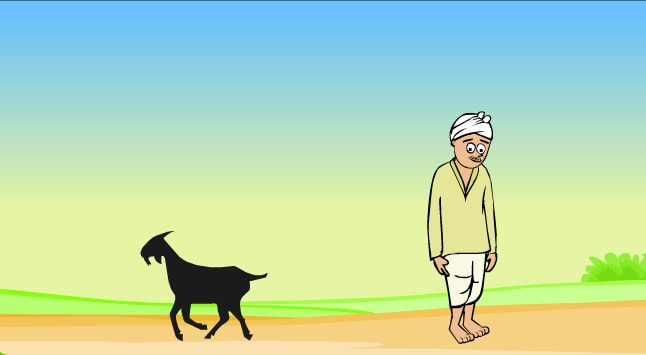 The goat began to laugh. As he laughed, he realized a sad truth, due to which he began to cry. This attracted the servant’s attention. “Why do you laugh and cry?” they asked the goat. The goat told them that he would answer only if their master were present there. So, the priest came running.

Then the goat began talking about his realization. “I used to be a priest too,” he told the priest. “And I too had offered many animals as sacrifice. As a result, I lost my head in all my past lives. And I should lose my head once more today!”

The priest was beginning to understand that he had been mistaken. He canceled the sacrifice and told the goat that the goat was safe. “No harm will come your way; you have my word.” But the goat told the priest that his misdeed of killing animals for no reason had not been washed away. Although the goat had realized his mistakes, his misdeed was too great, and he still had to be punished. You may also like to read, The Brave Little Archer.

Even so, the priest let the goats go. The priest even ordered some servants to take care of the goat. Thus, the goat roamed around in the rocky mountains. All of a sudden a thunderbolt struck the goat out of nowhere, killing him instantly.

A fairy happened to be nearby. Who, on seeing this, said, “Finally, this soul has been punished for the ignorant killing of animals from his life before.” Many people came to see what had happened, and all of them remembered the story of the goat who saved a priest from going the wrong way. Also, read The Magic Of Patience.

MORAL OF THE STORY: RELIGION IS NO EXCUSE FOR IGNORANCE.