This is the best short Christmas story with moral lesson for children. Once upon a time, there lived a man. This man had a special wrapping paper made of real gold. The man always wrapped his gifts in the same paper. Also, read The Mitten Story.

One day, a sad thing happened that upset the man. The man’s daughter had used up all the wrapping paper and there was none left. “What’s more, it was Christmas Eve! Now how am I to wrap all these presents?”  the man was utterly upset. 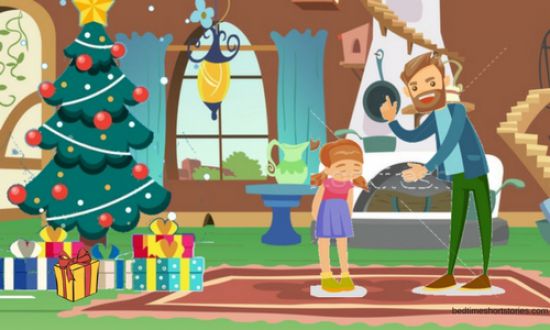 Due to this, he even scolded his daughter and punished her. Under the Christmas tree, he saw a little shoe-box, wrapped in the same gold sheet. “What is this?” the father wondered. “I wonder who is she planning on giving this present to. Furthermore, where did she get the money to buy a gift?”

Soon, it was Christmas Day. When the day broke, the little girl came running to her father. She knocked on the door before entering. And when she came to wish her father, she brought along a surprise. It was the little shoe-box wrapped in the golden wrapper!

“This,” she smiled at her father, “is for you. Here, open it!” Smiling, the father quickly opened the present. But to his surprise the gift was empty. “There is nothing here,” he thought. Then he said to his daughter, “You know, you never give empty presents to anyone.” You may also like to read, The Gift Of Christmas.

When the daughter heard this, she instantly had tears in her eyes. Then she said, “But it is not empty. I blew in kisses until the gift was full and then wrapped the gift with your golden wrapping paper.” And that was when the father realized his grave mistake.

All his life, the father chased materialistic values of the presents, and today he finally received a genuine present. “This is the best gift,” he said, hugging his daughter.

MORAL OF THE STORY: PRESENTS GIVEN WITH LOVE, NO MATTER HOW SMALL, ARE ALWAYS BETTER THAN MATERIALISTIC PRESENTS.