This is one of the best bedtime stories for 10 year olds. Once upon a time, there lived two brothers whose parents died early on. They worked hard so they could earn enough to live. They got married to settle for a merrier life but the elder brother became lazy after marriage. He left all the hard work to the younger brother and his wife.

The younger couple took good care of their garden, hoping a bumper crop. The elder was afraid his brother would get a greater share of the crop, so he told his wife to make the younger couple live apart. The elder was very greedy and claimed homes, fields, gardens, and cattles left by his parents. He left his younger brother only a tiny home and a small piece of land with a single star fruit tree. Also, read The Origin Of Star Apple. 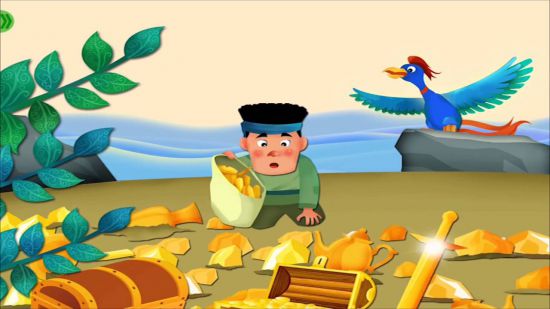 But the younger one hardly complained as he was very kind. He took good care of his star fruit tree, watered it every day and worked hard. The star fruit tree fruited unusually well that year. All its branches were weighed down with ripe fruits. The younger couple was very happy. They hoped to trade the star fruits for rice.

One day, a big raven landed in the tree and ate the fruits. The younger brother sent the bird away. Suddenly, it said, “Star fruits I eat, with gold I pay! Be ready with a three-foot bag and follow me to get it.” Hearing those words, the younger couple was very excited and decided to do as the raven said. The wife sewed a bag of 60 centimeters.

The next morning, the raven came back, ate the star fruits, and invited the husband to sit on his back with the bag.The younger brother climbed onto the raven’s back and the bird flew high into the air. The bird flew through the high mountains and vast seas and then landed on an island full of gems and jewels. The younger brother was delighted as he had never seen so much gold. He filled the bag and climbed back onto the raven’s back for the flight home. From then on, the younger couple became rich. They used part of their money to help the poor. You may also like to read, The Olive Tree And The Fig Tree.

One day, the raven came as usual. The elder pretended to send him away. Again the raven gave the same words, “Star fruit I eat with gold I pay! Be ready with a three-foot bag and follow me to get it!” The elder spouses discussed making the bag. In his greed, however, the elder told his wife to make a twelve-foot bag instead of a three-foot one.

The next day, the raven came to take the elder brother to the place of gold. The bird also flew through the high mountains and vast sees and then landed on an island full of gems and jewels. The elder was blinded by a mountain of gold. He quickly filled both the large bags and his pockets with precious jewels.

On the way back home, the raven struggled to stay in the air with all the extra weight. He asked the elder brother to throw away some of the gold but he didn’t listen. The raven became angry. He tilted his tired wings and dropped the elder and the bag off into the sea. It was all over for the greedy brother. Also, read The Giving Tree Story.

The elder brother came to an end because of his greed whereas the kind-hearted younger brother lived a happy life with his family forever.

Here is a short visual depiction of one of the best bedtime stories for 10 year olds “The Golden Star Fruit Tree“. See the video story below,