This is one of the really good short stories to read for kids. One day, Peter found a treasure map. “Hurray! I am going to find this treasure and have some adventure,” he exclaimed. Peter set off. He walked a long way and finally reached a forest. There, he met the lion. “You are strong and courageous! Will you come with me on a treasure hunt?” said Peter to the lion. Lion agreed and joined the forest. The forest was dense and dark. Peter was afraid, but with the lion by his side, he made it through. Read more such positive inspirational stories from here.

When they two finally reached the mountain, they met an eagle. “You have excellent vision and can alert us to dangers! Will you come with us? We’re looking for a treasure,” said Peter to an eagle. Eagle agreed and joined Peter and lion. The mountains were tall and craggy. The lion slipped but Peter was swift enough to give him a hand and pull him up. 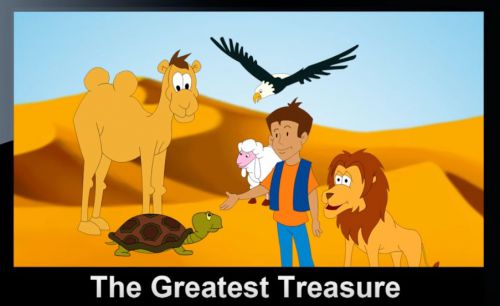 Eagle, with his sharp vision, watched every step they took. Soon, they reached a valley below where they met sheep. “Will you join us in our search for a treasure and keep us warm when it’s cold?” Peter asked sheep. Sheep agreed and joined Peter, lion and eagle. A cold wind swept across the endless meadow. They all huddled against sheep, who kept them warm and cozy.

The four finally reached the desert, where they met the camel. “You are called the ship of the desert. Will you help us get across and join the treasure hunt too?” Peter asked the camel. Camel agreed. Peter, lion and sheep mounted the camel and set off happily across the vast desert, with eagle enjoying the spectacle from above. Camel began galloping and everybody cheered with excitement. Crossing the desert on camel’s back was thrilling!

The five finally reached the ocean, where they met a turtle. “Can you help us cross the ocean? We are on a treasure hunt!” said Peter to the turtle. Turtle agreed and joined Peter, lion, eagle and camel. The rough waves almost drowned the party, but turtle skillfully transported them across.

They met owl on the other side. Owl spoke from his ancient wisdom: “Congratulations! You have found the treasure!” “Where is it?” they all exclaimed in surprise. “Together, you have passed the forests, climbed the mountains, dared the valley, braved the desert and crossed the ocean. You would never have done it without one another!” said the owl. They all look at each other and realized that the owl was right. They had found friendship! Indeed, they had found the greatest treasure ever!

Here is a visual depiction of one of the really good short stories to read for kids, “The Greatest Treasure”. See the video story below,