This is one of the best Arabian Nights stories for kids. Abdullah was a rich but greedy merchant. After having sold his spices in faraway lands, he was ready to go back home with his forty camels. On his way back, he met a holy man. The holy man confiding in him, said, “I can take you to a place full of precious stones and jewels like you have never seen before. You can load your camels with all you can find but you must give me half of it!” Abdullah’s eyes were shining and he agreed.

The two of them reached the secret and lonely land in the middle of tall mountains. Abdullah could hardly wait. The man pulled out a small, ancient box from his bag. He took some mysterious powder out, muttered under his breath, and sprinkled it on the ground. Also, read The Merchant And His Parrot. 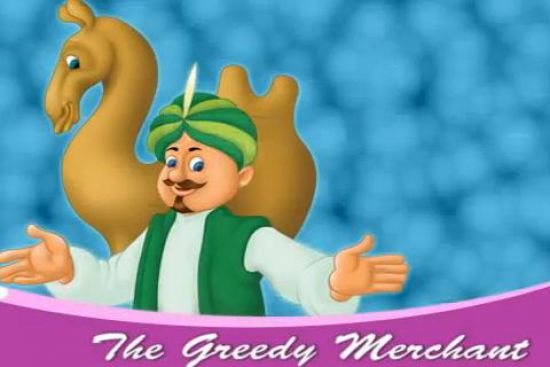 Image Source–> www.falibo.com. To Abdullah’s astonishment, an opening appeared in the mountain before him. It led into a cave full of precious sparkling jewels and gold. Abdullah quickly packed the riches onto his camels. Now, Abdullah wanted more than his share of twenty camels. He said to the holy man, “You are a holy man! Why do you want so much of the treasure? Let me have thirty camels and you can keep ten.”

The holy man understood Abdullah’s greed and was disgusted, but he agreed. Since he had agreed so easily, Abdullah decided to try for more. “Ten camels will also be a burden to you. Give those to me,” he said. The holy man decided that Abdullah needed to be taught a lesson, so he agreed.

Abdullah was still not satisfied. “The box too is no use to you! Why don’t you let me have that as well?” The holy man said, “Alright, you can take it but never use it. If you put the powder in the right eye, you will see everything as gold; but if you put it in the left eye, you will go blind.” Then, he walked away.

Abdullah did not heed the holy man’s warning. He sprinkled the powder in his right eye and was thrilled to see everything in gold. “Imagine how much gold there would be if I sprinkled it into my left eye as well!” he thought. Unfortunately, the minute he did so, he went completely blind, just as the holy man had warned. Abdullah had learnt his lesson the hard way, but now, it was too late to repent. You may also like to read, Sheherazade And Shahriar.

Here is a visual depiction of one of the awesome Arabian Nights stories, “The Greedy Merchant”. See the video story below,