The next morning, sparrow saw something strange. The prince was crying. The sparrow asked, “What’s the matter with you?” The prince said, “I see a little boy sick in bed. He has no mommy, no food. Can you take my ruby to the boy, please!” The sparrow felt sorry and said, “Yes, I will.” The sparrow took the ruby and flew to the boy. He dropped it on the boy’s bed. The sparrow felt great and he said, “Get well soon!” 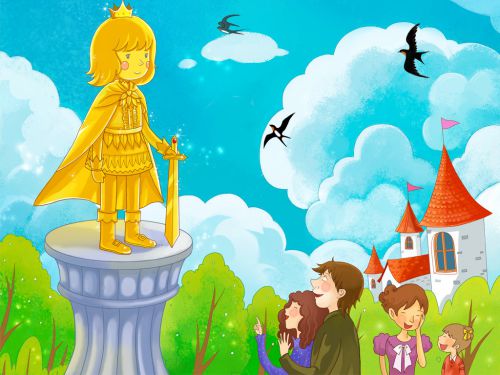 The next day, the prince said, “I see a little girl selling matches in the street. However, she has no coat, or shoes. She has no one to take care of her. Can you take my other eye to the girl?” It was getting cold. The sparrow was late to leave but he said, “I will.” The sparrow took the emerald. He flew to the match girl and he left the emerald in the girl’s basket. The sparrow saw the girl smiling and he said, “I am so happy.”

The prince had no eyes anymore. The sparrow felt sorry for the prince. So he said, “I can’t leave you. I’ll stay here with you.” From that day on, the sparrow became the eyes for the prince. Every morning, the sparrow looked over the town. When he saw someone needed help, he told the prince. He took part of the gold from the prince and he gave it to those who were in need.

Here is a short visual depiction of “The Happy Prince“. See the video story below,