The Hare’s Liver – An Aesop Story

This is an amazing aesop story for kids to read. A long, long time ago, there lived a dragon King under the sea He was very sick. No matter how hard they tried, no one could cure the dragon King. So, the sea animals had a meeting. “The King is sick,” a sea animal said. “I know,” another agreed. “He doesn’t look well at all.” “What can we do?” the smallest sea animal asked. “No medicine helps,” an older one responded. “Let’s find a really good doctor.” 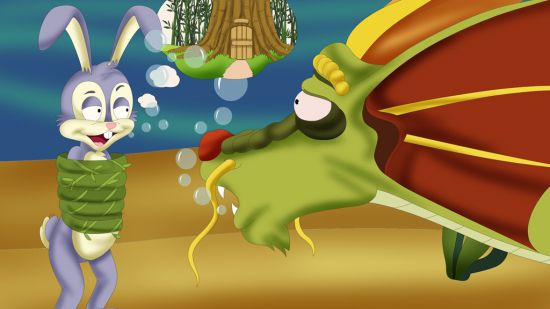 At last, a turtle spoke up. “I’ll go and bring a hare!” he volunteered. “I can swim in the sea and walk on land.” Confident, the turtle continued, “I’m obviously the one who can go and find the hare.” “Indeed,” the doctor said. “But you must hurry. The dragon King doesn’t have much time!” The dragon King ordered the giant octopus to draw a sketch of a hare. He gave it to the turtle who tucked it into his shell and swam toward land.

It was spring time! Everybody on land was happy. The turtle looked everywhere for hare, but had no luck. “Where can I find a hare?” he asked himself. “I have to hurry. The King doesn’t have much time!” Turtle went up a hill to find signs of a hare.

After a while, he found one quite looking like the drawing he brought with him. “Good morning, hare!” Turtle said trying to con him. “I came from the sea Kingdom! My King wants to see you!” “Why does your King wants to see me?” the hare asked. “He wanted m to invite you to the sea Kingdom. It is a very wonderful palace under the sea.” The hare hesitated. You may also like to read, Tortoise And The Wisdom Of The World.

“There are many treasures you can have in the sea Kingdom,” the turtle lied. “Hmmm… It sounds interesting!” the curious hare said. “But how can I get there?” “No need to worry!” the turtle assured him. “Just hop on my back! I’ll safely take you there!” Deceived, the hare jumped on turtle’s back and went down to the sea Kingdom.

“Here we are! Wait here and get ready to meet the dragon King,” turtle said with a sly smile. At that moment, the sea animals appeared and tied up the hare. “Let me go!” he cried. “I’m here to see the King!” “I’m the dragon King!” the King said to a frightened hare. “I’m very sick. Unfortunately, you have to die. I need your liver to cure me.”

The hare was very scared but he came up with an idea to help him survive. “Your Majesty!” he said, “I don’t have my liver with me!” “What? Where is it?” the dragon King demanded. “I left it in my house,” the hare lied. “I’ll go and bring it back to you.” “Alright, turtle, you go up on land with the hare and bring his liver back to me.” Happy to escape from the sea Kingdom, the hare said, “It’s good to be back home. Now, goodbye, turtle!” Also, read The Hares And The Frogs.

“Wait!” the turtle shouted. “You must give me your liver! The King doesn’t have much time!” “Foolish turtle, did you really believe I can pull out and put back my liver?” Shaking his head, he told the turtle to go. “Good luck!” The hare laughed as he walked into his house. Realizing he had been fooled, the turtle  sighed, “What goes around comes around!”

MORAL OF THE STORY: WHAT GOES AROUND, COMES AROUND.

Here is a short visual depiction of the aesop story “The Hare’s Liver?“. See the story video below: