The Hawk And The Hen

This is animals story in english which has been inspired by the Philippine Folktale. Once upon a time, a hawk fell in love with a hen. Every day when the hawk would fly above in the sky, he would see the hen walk around on the ground. “I shall marry the hen,” he thought.

Then one day, as he was flying, he swooped down and went to meet the hen. After exchanging greetings, the hawk told the hen that he wanted to marry the hen. “I will agree to marry you, but I can’t marry you until I don’t have wings as huge as yours!” The hawk agreed. He then gave the hen an engagement ring which was too huge for her to wear. Also, read The Little Red Hen. 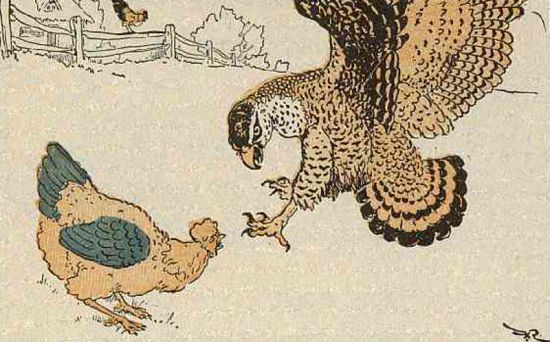 Image Source–> kahimyang.com. The hen was proud of the ring she had received from the hawk. She wore it around her neck and let the sunlight bounce off it. All the animals were looking at the hen and the ring around her neck. However, a cockerel came rushing to her, and he did not seem pleased. “What is the meaning of this?” he asked. “Weren’t you supposed to marry me or have you already forgotten?”

The hen stood there silently, “throw the ring away,” she was told. And she did exactly that. But soon after that, the hawk returned with a pack of beautiful feathers. Now the hawk did not know what had happened, and neither was he aware of the fact that the hen was to marry the cockerel. He found the hen and presented her with the feathers. “Now we can get married,” he announced happily.

But then the hawk saw that the hen did not have the ring. Suddenly the hawk became aware of what was happening. Yet he decided to ask the hen first. “Where is the ring that I gave to you?” the hawk asked. “Why aren’t you wearing it?” You may also like to read, The Bag Of Salt.

Now, the hen was aware of that the hawk was angry. Quickly she started thinking about stories to tell. Finally, she said, ” yesterday when I was walking around, a snake came at me out of nowhere. That snake wanted to eat me. And as I ran away from the snake, I think, I somehow lost the ring. But, it is not my fault. I did not intend to loose the ring”.

But the hawk knew all too well what the hen was trying to do. So, he told her that her behavior was disappointing. “If and when you find the ring, I will come down and marry you. But as punishment for breaking your promise, you will scratch and peck the ground until you find the ring. And every chicken of yours, I find, I will take it away from you!”

The hawk flew away without giving the hen another chance to lie. And ever since then, the disloyal hen had been scratching and pecking the ground, and the hawk preys on the chickens. Also, read The Swan And The Owl.

MORAL OF ANIMALS STORY IN ENGLISH: AN OPEN ENEMY IS ALWAYS BETTER THAN A DISLOYAL FRIEND.

Tagged with: animals story in english