The Hen And The Fox

This is one of the great fables with morals for toddlers. Once upon a time, there lived a hen on a farm. Now, all the others had gone back to their shelter, and only one hen remained.

This hen went about pecking and eating grains. She was thoroughly enjoying herself. This farm was near a forest. That afternoon as the hen was pecking at the grains, a Fox was passing by. This fox had been looking for food all day long. “How long should I keep looking for food?” the Fox thought as he was passing by. Then he saw a lone hen pecking at grains. He had an idea. You may also like to read, The Sly Fox. 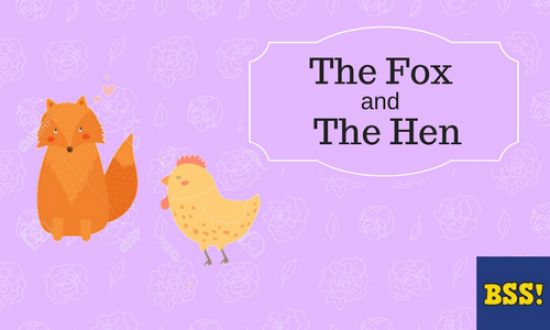 “Dear hen,” he called out to her. The hen looked at the fox but decided not to react. “You look fine today,” the Fox began. Even then the hen ignored the fox. “I have been looking for you,” the Fox continued. “You see, I have heard that you have a melodious voice. Since long ago, I have wanted to hear you sing. I have waited a long time for a chance like this.”

“Will you sing for me, hen?” the fox asked. He made sure to add enough flattery to his talks. Silly hen, not knowing what flattery and appreciation meant, believed the fox. She went closer to the fox and happily agreed to sing. But the moment she closed her eyes and opened her mouth to sing, the clever fox caught the hen’s neck with his jaws and ran.

Only then, did the hen realize what a terrible mistake she had made? “Now what shall I do?” thought the hen. And just then, a pack of wild dogs started chasing the fox. The Fox being a clever animal knew he could not match the wild dogs, began running even faster. Now, the hen had an idea. “I hope my plan works,” she thought.

The Fox thought for a moment and agreed. It seemed like a good plan. So, he turned around and stopped. When the wild dogs came nearer, he opened his mouth to talk. And the hen took that chance to make a run for her life. She slipped away and disappeared as the wild dogs tore the fox into pieces. “I will never, never give into flattery again!” the hen thought. “And I will not trust foxes ever again!”