This is The Hospital Window Story for kids. Once upon a time, two men shared a hospital room. Now, one of these men was allowed to sit up for an hour every day. The other one, however, was on a complete bed rest. The one who was on bed rest couldn’t even see the other man clearly. But he was glad to have someone around him.

The two of them were seriously ill, but they made pleasant conversations with each other. They would talk about their homes, jobs, family, friends and even what they would do when they leave the hospital. Every afternoon, at the same time, a nurse would come and help the other man to sit up. You may also like to read, The Blind Man With A Lamp. 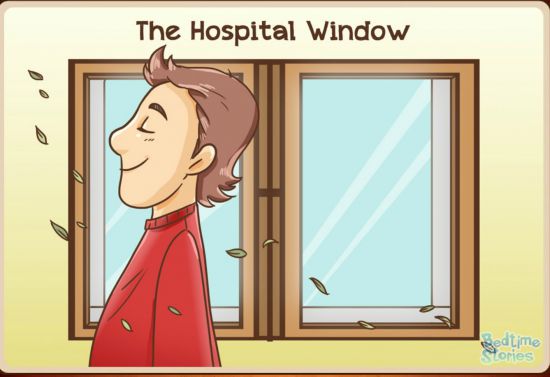 Image Source@ www.youtube.com. And every afternoon, this man would tell the other man lying on his back about the things that happened outside the window of the hospital room. There were new instances every day. The man who wasn’t allowed to get up enjoyed this hour the best. “I at least get to hear what happens outside. Even though I can’t go out, I feel alive,” he would think.

From the talks they had had, the man on his back knew exactly what the other side of the window looked like. “There is a small lake. And there are many ducks and swans. Many children come to sail their model boats. Also, there are many flowerbeds, with a variety of flowers. And young lovers walk arm in arm,” the man on complete bed rest would think. He would also wonder how could he possibly thank the other man. It was that one hour that made this man want to live.

One afternoon, the other man described a parade passing by. But for some reason, the man lying in the bed could neither hear the marching or the drum beats. But he could imagine and for that he was glad. Days, months and weeks passed by like that. Then one morning the nurse found the man by the window had passed away. Even the nurses were saddened, but they soon took the body away. Also, read Emily- The Girl Who Couldn’t Fit In.

Meanwhile, the man who had been on complete bed rest had been getting better. Then, when the time was appropriate the man asked to be transferred to the bed by the window. The nurse gladly did as she was asked. As soon as the man was comfortable, he propped himself up on an elbow to see the real world he been told of.

But all he saw was a brick wall outside the window. Then he asked the nurse that what could have forced the other man to lie to him. The nurse looked at him with a sad look and said, “that man was blind. Perhaps he only wanted to encourage you, in his own way.” You may also like to read, The Greatest Treasure.

MORAL OF THE STORY: DESPITE OUR SITUATIONS, WE SHOULD STRIVE TO MAKE OTHERS HAPPY.

Here is a visual depiction of, “The Hospital Window Story”. See the video story below,