The Hungry Fox Who Got Caught In The Tree Trunk

This is one of the amazing moral values stories for students. Once upon a time, there was a hungry fox. He was looking something to eat. He was very, very hungry. No matter how hard he tried, the fox could not find food. The hungry fox explored the entire forest but in vain.

Finally, he went to the edge of the forest and started searching for food. Suddenly, he caught sight of a big tree with the hole in it. Inside the hole, there was a package. The hungry fox immediately thought that there might be food in it and became very happy, He jumped into the hole without thinking the later consequences. Also, read Wise Cock And Wicked Fox. 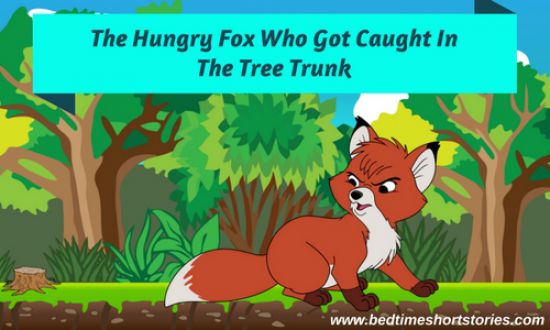 When he opened the package, he saw slices of bread, meat, and food in it. He was very amazed. His mouth was watering already. An old woodcutter had placed the food in the tree trunk. Before he began to cut down the trees in the forest, he was going to eat it for his lunch.

The fox went deep inside the tree trunk and began to eat the food. After the fox finished, he felt very thirsty and decided to leave the hole. He decided to bring some water from the nearby spring. However, no matter how hard he tried, he could not get out of the hole. The hungry fox had eaten so much food that he became too big to fit through the hole. The fox was very sad and upset. He sadly said to himself, “I wish I had thought a little before jumping into the hole.” You may also like to read, The Wild Boar And The Fox.

MORAL OF THE STORY: IF YOU ARE TOO GREEDY, YOU CAN GET TRAPPED AS WELL!