The Hungry Tigress And The Bodhisattava

This is one of the amazing Jataka tales stories in English for kids. Once upon a time, the Bodhisattva took birth in a noble family. In this birth too, he had an immense love for knowledge and animals.

As the Bodhisattva grew older, he grew up to be a fine scholar mastering many scriptures and collecting immense knowledge. But as he grew older, the Bodhisattva realized that he had no interest in the worldly pleasures. He soon denounced his pleasurable life and went on ahead to seek spiritual uplift. Also, read The Tiger King. 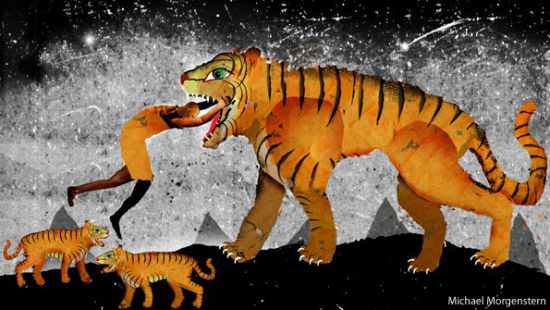 Image Source@ www.economist.com. After leaving his life, he became a hermit. He then had many disciples and students. All of whom were taught and cared for well. And they all took after their teacher. One day, the Bodhisattva and one of his disciples decided to take a stroll in the forest nearby. This had become a regular practice. They often went for strolls.

While they were walking, the Bodhisattva notices something extremely terrifying. He saw a tigress, which looked weak and hungry. The tigress was about to devour her own cubs. Now, that moved the Bodhisattva’s heart. He did not want the poor animal to suffer the guilt of eating her own cubs. So, he came up with an idea.

He sent his disciple back to do something. The Bodhisattva had decided that he would offer himself as food to the starving tigress. He simply could not let her eat her cubs. And he knew if his disciple had seen this, he would definitely stop the Bodhisattva from offering himself. You may also like to read, The Tiger And The Golden Bangle.

He knew the Bodhisattva well. So, he knew the hermit had offered himself to save the tigress. He went back and told his fellow disciples of the Bodhisattva’s sacrifice out of love and compassion.