The Hunter And The Rabbit

This is one of the best moral stories for kids in english for competition. Once upon a time, there lived a cruel hunter near a forest. Every day, he used to go and hunt for rabbits. He loed to catch rabbits and feast on their meat. Many people tried to stop him but he would just ignore them.

This continued for many days and soon the number of rabbits in the forest became very less. The rabbits hid themselves in their burrow as they saw the hunter coming towards them. Now, this hunter was so cruel that he would put his hand in their burrow and pull them for his every day feast. Also, read Rabbit And Lion Story. 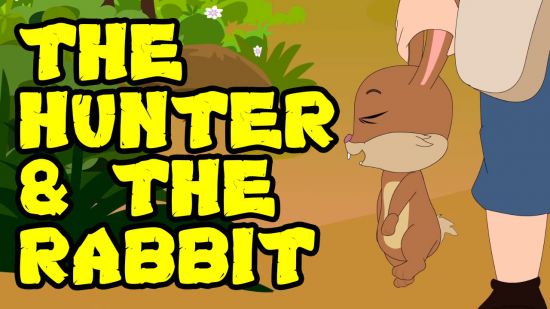 One day, he caught a rabbit and started for his home, holding a rabbit by its ears. On his way home, the hunter met a Saint. The Saint asked the hunter to free the rabbit and get blessed for the good deed. The hunter not only refused but decided to cut the throat of the rabbit right there, in front of the Saint.

He took out a sharp knife from his bag. But when he tried to cut the rabbit’s neck, the knife slipped from his hand and fell onto his foot cutting him deeply. He instantly cried out in pain and released the rabbit. The hunter paid the price for his sins. Since his foot was very badly injured, he could not walk properly and became unfit to hunt ever again.

This incident made the hunter realized that how cruel and stubborn he was. From that day, the hunter gave up hunting and became a civilized man and lead a righteous life. You may also like to read, How The Rabbit Lost Its Tail.

MORAL OF THE STORY: ONE MUST ALWAYS BE PUNISHED FOR DOING BAD DEEDS.

Here is a short visual depiction of one of the moral stories for kids in english for competition “The Hunter And The Rabbit”. See the video story below,

Moral Stories For Kids In English For Competition Video