This is one of the amazing animal stories for kids. Once upon a time, in a dense forest lived a hawk on top of a hill. And at the foot of the hill, a crow lived in a tree. The crow was extremely foolish. He tried to imitate everyone.

Every day, the hawk used to wake in the morning and soar through the skies in the afternoon. And every day, the crow, perched on tree branches would look at the hawk. Day after day, the crow watched the hawk circling the skies. Also, read The Thirsty Crow. 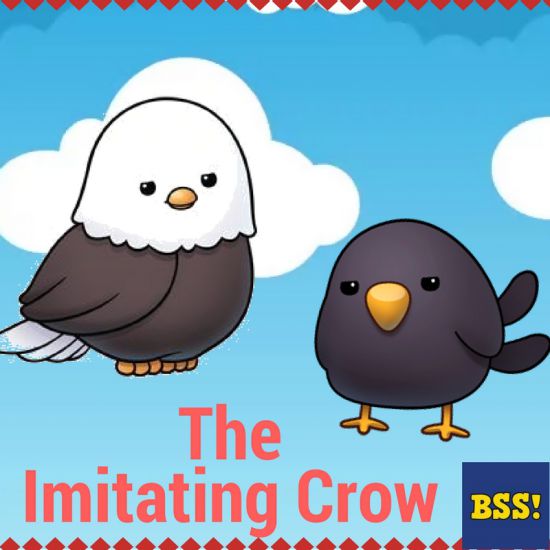 All of a sudden the hawk swoop down and catch a prey. “If the hawk can do that, even I can. Besides, it looks incredibly easy!” the crow thought. “One of these days, I too will do the same thing and show him!” A few days passed by and the crow continued to watch the hawk. Every day, the crow would follow the hawk’s every movement and think “So easy! I will do it too!”

One day the crow finally decided to fly with the hawk and hunt for a prey. So, when the hawk came out in the afternoon, the crow flew behind him too. “Today I’ll show him that I am no less than him,” the crow muttered. As they flew, suddenly a baby rabbit hopped into a clearing. Both, the crow and the hawk saw the baby rabbit.

Before the crow could even move, the hawk swooped down fluidly and caught the baby rabbit. The crow could only stare as he saw the hawk fly away. But this incident did not discourage the crow from imitating the hawk. He still continued to follow the hawk.

Next, they saw a big fat mouse. The crow did not waste a single moment before soaring downwards, in the direction of the mouse. “This time I will definitely catch this one and show him!” The crow flew towards the fat mouse with all his might. You may also like to read, Hawk And The Nightingale.

And before he knew it, the mouse had disappeared. The crow, who was flying at a great speed could not stop. He crashed right into the hill and slumped down to the ground. The hawk flew toward the crow. He waited a moment before speaking, “Imitating others is a fools game, crow. Hunting is not an easy task and neither is imitating.” Then the hawk flew away.

The crow had never realized that the hawk had sharp eyesight, and he did not. Hunting looked easy, but in reality, it wasn’t. For that day onwards, the crow never tried to imitate anyone. Also, read The Fox And The Crow.

MORAL: BE YOURSELF AND DON’T COPY OTHERS.