This is one of the funny animal stories for kids to read. A long time ago in a far away forest, there lived a wolf and a jackal.

One day, they met and got talking. The wolf looked at the jackal and asked, “How much have you studied?” The jackal said, “Well, Mr. Wolf, actually I’m only half-educated!” The wolf was shocked at hearing this and said, “Ha! Only half-educated! That makes me superior to you! You better call me Sir from now on.” Also, read The Blue Jackal. 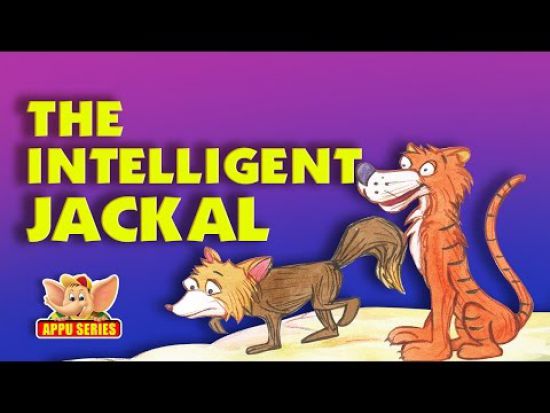 Image Source@ wn.com. Just then, a ferocious tiger stepped out from behind a bush and seeing them asked, “Going somewhere?” The jackal whispered into the wolf’s ear, “Well, Sir! You are superior to me, so tell me what should we do?” But a frightened wolf could not utter a single word.

The jackal thought fast and said, “Oh mighty tiger, we were on our way to consult with you, as you are the most powerful and clever animal in the forest.” Hearing his praise, the tiger was pleased and asked what the problem was. The jackal said, “I have caught two chickens and my friend here says that since he is more educated, he must get one. Now, what do you think?”

The tiger turned to the wolf and growled, “How much you have studied?” Hearing the tiger’s growl, the wolf was even more frightened and his teeth began chattering. The jackal quickly said, “He says he has as many qualifications as the teeth in his mouth!” The tiger laughed and opening his mouth to show his sharp teeth and said, “Is that so! In that case, I’m much more educated than him.” The sight of the tiger’s teeth unnerved the wolf so much that his legs gave way he fell down on his knees. Also, read The Jackal And The Drum.

Seeing this, the jackal said to the tiger, “He agrees that you are superior and is bowing in respect. Thank you for solving our problem!” Hearing this, the tiger was puzzled and said, “I have?” “You have shown us that you deserve to get the chickens,” said the jackal. The tiger was pleased and thought, “Once I eat the chickens, I can eat this jackal and the wolf, too.” So, he followed the jackal and the wolf to the small hole in the ground not far off.

The jackal said to the tiger, “Here’s my home! My friend, the wolf will go in and get the chickens for you.” The wolf didn’t know what to do but since he was so scared, he felt it would be better to go in and get away from the tiger. The tiger and jackal waited outside the whole for the wolf. But when he didn’t come out, the jackal said, “I wonder what’s keeping him? Let me go and see! I’ll be back soon, Mr. Tiger.” He then disappeared into the hole. The tiger waited and waited but no one came out.

After waiting for a long time, he realized he had been tricked. He was very angry and growled. He tried getting into the hole but it was too small. Finally, he gave up and went away. The wolf turned to jackal and said, “I’m sorry dear friend for calling myself superior than you! You have taught me that education is of no importance if you cannot apply your brains!” You may also like to read, The Jackal’s Spell.

Here is a visual depiction of the funny animal stories for kids, “The Intelligent Jackal”. See the video story below,