The Jackal Who Saved The Lion

This is one of the good story of Jataka tales. A very long time ago, there lived a mighty lion in the jungle. One day, he went to the river to drink water. But his leg got stuck in the big, slushy mud of the riverbank. No matter how much he tried, his leg wouldn’t come out! He called out for help but alas! There was none and so he remain stuck in the mud.

After a few days, the kind jackal came to the same spot of the river to drink water. He saw the lion stuck in the mud. “Your Majesty! Are you fine?” asked jackal. “No jackal, I am stuck in the mud. I cannot move. I have been here for days now,” the lion replied. You may also like to read, The Jackal And The Drum. 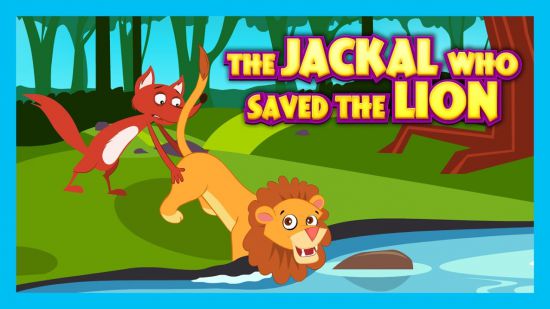 Image Source@ www.youtube.com. The jackal quickly crossed over to the riverside where the lion was stuck. With his paws, he dug out the mud where the lion’s leg was caught. “I think your leg should be free now! Please try and come out!” said the jackal. The lion tried to move but he couldn’t. His leg had become stiff after being in the same position for so many days.

Seeing this, the jackal made more efforts to free the lion. He pushed him and pulled him till he finally came out of the mud! The lion was very happy to be able to move freely after so many days. He thanked the jackal. The jackal said, “Now, I must go home!” “Where will you go? Why don’t you come and stay with me. You’ve saved me and now you are my friend for life,” said the lion. The jackal accepted the lion’s offer and both grew their own families.

They continued to live together and hunt together. Their children would even play together but the lioness didn’t like the friendship between the jackal and the lion. She conveyed the same to the Lady jackal. “The lioness has told me that the lion doesn’t want us to live here with him and his family,” cried Lady jackal.

Hearing this, the jackal was very upset and went to see the lion. He said to the lion, “I thought we were friends but if you didn’t want my family and me to live here with you, you should have told me so. Instead, you conveyed your message to me through the lioness and the Lady jackal. I’m leaving with my family!” The lion had no clue about this and said, “No friend, please don’t leave me and go! I have not done anything of that sort. I want you to stay with me.” Also, read The Fox Reared By Lion.

The jackal understood what had happened. The jackal said, “I’m sorry friend! I understand your sincerity and love towards me I think I judged you too quickly. It’s not you who wants me gone but the lioness. I shouldn’t live here any longer.” The lion denied and promised him that he would talk to lioness. But jackal decided to another home and promised to remain friends forever as it was best for both the families.

Though the lion was upset, he agreed. And so, the jackal made another home for himself and his family. But his friendship with the lion remained. They met every day, went on hunts together and shared life’s good and bad till the end of their lives. You may also like to read, The Blue Jackal.

Here is a visual depiction of one of the great story of Jataka tales, “The Jackal Who Saved The Lion”. See the video story below,