The Jay And The Peacock

This is one of the awesome children’s fables with morals for kids. “Wanna play hide-and-seek?” Jay’s friends asked. “Okay,” said Jay, “but we play that game every sunrise!” “Birdball!” Jay heard a shout coming from the aviary. He flew to a higher branch to see a commotion. Parrots, peacocks, and pelicans hurried to pick teams.

Jay watched their bright colors dash and flash in a flurry. “Why don’t we play Birdball?” Jay asked his fellow jays. “What’s Birdball?” they squawked. “Never mind,” Jay frowned. “I’m not going to play today. Hide-and-seek is for dull birds.” Also, read The Peacock And The Crane. 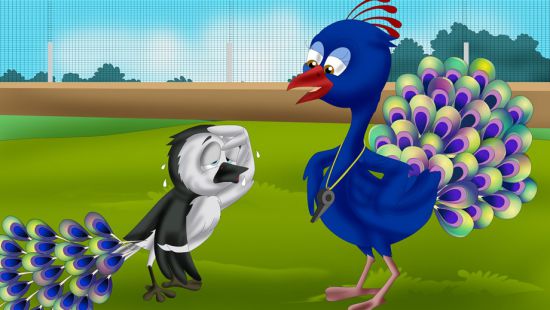 Just turned back to the adventure unfolding at the aviary. He wanted to join the big and beautiful birds.Jay hid near the keeper’s shed. He saw molting peacocks shake off extra feathers before heading to the field. An idea popped into his brain! Swooping down, Jay grabbed each peacock feather and tucked them under his own wings. “Now, I’m beautiful,” he thought, “and they’ll let me play.”

By the time Jay reached the field, he was as breathless as a fish out of water. The peacock feathers were heavy! “Can I play too?” he asked the referee. The peacocks held back their giggles and snorts as the referee scratched her beak. “I, uh, suppose you can play,” she said, “Game on!” Jay lugged himself onto the field. Whoosh! The ball passed by him, but he was too slow to catch it.

Peacocks passed him the ball but Jay couldn’t keep up. His team was loosing and it was his fault. “What else could go wrong?” he wondered. “Keepers are coming,” a pelican yelled. “Back to your exhibits!” All around Jay, birds buzzed with panic. Birds scrambled back to their cages and perches, brushing off Jay’s costume as they ruffled past. Now everyone could see he was just a dull, gray jay! You may also like to read, The Crow And The Peacock Story.

“I… I…” Jay began to explain.The referee flew down and patted her wing. “Don’t worry, Jay. We all know you aren’t a peacock” she said. “We know, too!” called the other jays. Jay felt silly to try to trick everyone. Not only had he made peacocks, he’d hurt his friends’ feelings. Jay flew back to his spruce tree and spent the night thinking. He wanted to show other jays he didn’t think they were boring, but he also wanted to play new games with the birds at the aviary sometimes.

By sunrise, Jay had finished his secret plan and tucked a notebook under his wing. “I’m sorry about yesterday,” Jay told his friends. “Want to play a new kind of game?” The jays followed him to the aviary where he explained that they would play Hide-and-seek Birdball. “Never heard of it,” said the referee. Jay pulled out the rule book he’d written the night before. He explained how to play and shared the most important rule. “Everyone has to be themselves and try their best!”

The birds cheered and the game tipped off. Together they played and played and played. In fact, they would have played all day except… “Keepers!” yelled a pelican. This time, every bird buzzed home with a smile! Also, read The Greedy Crow Story.

MORAL OF THE STORY: DON’T BE A COPY OF OTHERS; JUST BE YOURSELF!

Here is a short visual depiction of one of the best children’s fables with morals “The Jay And The Peacock“. See the video story below,