This is The Jungle Book Story.  The story is about a man-baby who was found in the jungle by Bagheera the panther. Bagheera carried the baby to his friends, the wolves. The wolves raised the baby as their own. They named him Mowgli. Mowgli learned to take care of himself in the jungle, but Bagheera the panther was always nearby. He was ever ready to protect little Mowgli. The elephants became his friends. Even the elephant’s gruff leader, Colonel Hathi, became Mowgli’s friend. It was Colonel Hathi who marched every day at the head of his elephant patrol.

Not everyone in the jungle was Mowgli’s friend. There was hungry aka the constrictor. His eyes could hypnotize almost everyone. And his coils could crush almost anything. Mowgli’s most dangerous enemy was Sher Khan, the man-eating tiger. Sher Khan was determined to kill the Man-cub, Mowgli before he had a chance to become a man. 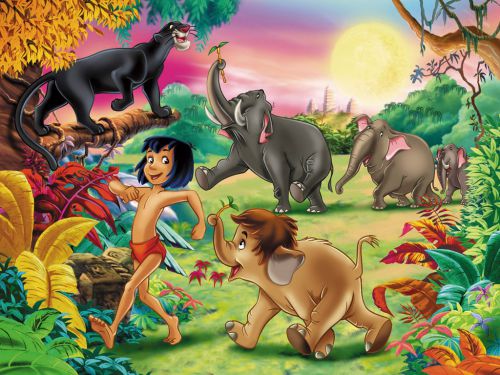 The leader of wolf pack decided there was only one way to keep Mowgli safe. “The boy must be taken to the Man village,” they said. Bagheera agreed to take him there. Mowgli thought that he and Bagheera were on just another walk in the jungle. Then Bagheera told him where they really were going. Mowgli cried, “No! I want to stay in the jungle.”

Mowgli would not listen to Bagheera and he ran into the jungle alone. He was not alone very long. Within minutes, he was befriended by a happy-go-lucky jungle bear named Baloo. After a while, Baloo and Mowgli went swimming in the river. Baloo floated on his back, and Mowgli rode high and dry on the bear’s fat tummy.

Suddenly, Mowgli was whisked up into the treetops. A band of monkeys had reached down from an overhanging limb and had grabbed him. The monkeys took Mowgli to the ruins of an ancient temple. There the king of the monkeys was eating bananas. He was waiting anxiously to see the captive. “Tell me the secret of Man’s red fire!” King Louie said. But Mowgli didn’t know how to make fire. He could not tell the king the secret even though his very life depended on it! Fortunately, Baloo and Bagheera arrived just as King Louie was getting angry with Mowgli. Quickly they figured out the way to save their friend. Also, read Robin Hood Short Story.

Baloo disguised himself as a lady monkey, but King Louie was not fooled for long. A wild chase followed, and the whole ancient temple was shaken down. The three friends escaped. After the trouble with King Louie and his band, Bagheera and Baloo tried to tell Mowgli that there would be even greater danger in the jungle. Once again Bagheera insisted that Mowgli goes to the Man village. “No! No! I do not want to go to the Man village,” Mowgli cried. Without another word, he disappeared deep into the jungle.

Again Bagheera and Baloo searched for Mowgli. But Sher Khan, the tiger, found him first. Sher Khan was furious when Mowgli refused to be afraid of him. He bared his great fangs and leaped! Sher Khan just landed a few inches away from Mowgli. He landed with a THUD because Baloo has grabbed the tiger’s tail. The big bear had gotten there just in a nick of time! Sher Khan lashed about, trying to get at Baloo, but the bear hung on. When Sher Khan could not reach Baloo with his fangs, he tried to shake him loose. Sher Khan cracked his tail like a whip.

Suddenly a storm came up. A lightning bolt flashed down and set a nearby tree afire. Mowgli saw a way to save Baloo. He knew the one thing Sher Khan feared was fire. Mowgli took a burning branch in his hand and ran towards the tiger. The fire frightened Sher Khan so much that he took off like a rocket! “We’ll never see him around these parts again,” Bagheera sighed in relief.

Mowgli, Bagheera, and Baloo promised they never would be parted by anything again. Just then, Mowgli saw something he had never seen before. Mowgli story took another twist when he saw a girl. she was getting water at the pool, just outside the Man village. That made Bagheera and Baloo very sad. They were sad only for the few moments because they knew Mowgli was doing the right thing. They saw him smile as he picked up the water jug. Then they saw him go along with the girl to the Man village. Mowgli’s friends knew that was where Mowgli really belonged. They had brought him safely to his new home.

Here is a short visual depiction of “The Jungle Book Story“. See the video story below,