One fine day, the king, the minister, and the merchant met and decided that their sons needed to mend their ways. They summoned the three boys and asked them to go out into the world and put the skills they had to use. “The three of you should learn to be self-sufficient!” said the fathers. The three friends left their homes and began traveling. “I have heard that there is a mountain nearby that has several gemstones scattered on its peak. Let’s go there and fetch a few gems. We can sell them and make money,” said Ramu. Prabhu and Raghu liked the idea very much. The three soon set off in search of the mountain. 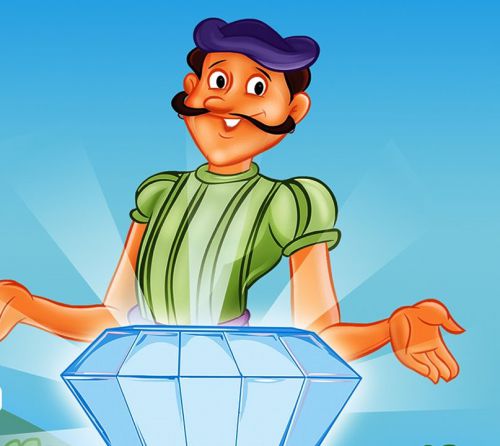 “I have heard that there is a mountain nearby that has several gemstones scattered on its peak. Let’s go there and fetch a few gems. We can sell them and make money,” said Ramu. Prabhu and Raghu liked the idea very much. The three soon set off in search of the mountain.

After many days of traveling, they finally reached the mountain top. They saw several gems scattered all around over there. Each of them picked one gem knowing that it would fetch them a very large sum of money. Once they reached the bottom of the mountain, Raghu said, “Let’s swallow the gems. That way, we can travel through the forest without worrying!” Others agreed and all of them swallowed their gems.

A thief had been hiding near the bushes and heard what they said. He decided that he would travel with them and gain their trust. When they were sleeping, he would kill them and take the gems. “May I travel with you kind sirs? The forest is full of thieves and I am afraid to travel alone,” the thief asked them. The friends agreed at once.

The next day as they were traveling, a gang of bandits captured them. They searched all for four but didn’t find any money or wealth on them. The chief dacoit had a parrot that would tell him exactly where the money was hidden. “The gems are in their stomach!” said the parrot. The chief was about to kill Prabhu and take the gems out of him.

The kind thief stepped forward. He knew that once the dacoit found that he had no gems in his stomach, the others would be set free. “Please kill me first!” he begged. The dacoit killed him and found nothing of any value within him. “My parrot was wrong! I have killed this man for no reason,” the dacoit said. Saying so, he freed the rest.

Prabhu, Raghu, and Ramu traveled back to the home with their gems. They sold them and made a lot of money. But they never forgot that man who had saved their lives.

Here is a visual depiction of one of awesome panchatantra tales, “The Kind Thief Story”. See the video story below,