The King And His Three Daughters Story 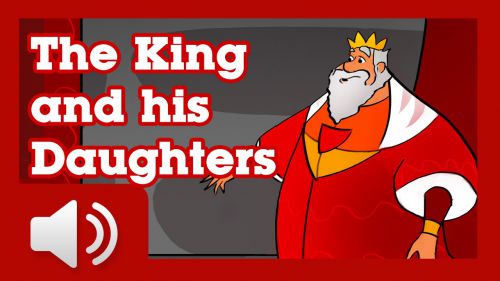 the king and his three daughters story Image Source –> @www.youtube.com

The little princess hid herself in the woods, but she soon got very tired. She sat on a log and started to cry, when a Prince, who was passing by on his street heard her. As soon as he saw the pretty princess, the young Prince fell in love with her. The Prince took her to his castle and soon asked her to marry him. The young princess told him that she would only marry him, if her father, the king, came to the wedding. “Sadly, my father is angry with me and has told me never to return to his kingdom,” she explained.

“Don’t worry my darling, I will send him an invitation to our wedding. And when he arrives, we will teach him a lesson,” said the prince and immediately sent a wedding invitation to the king. But the clever prince didn’t write that he was marrying the king’s youngest daughter.

So when the wedding day came, the king arrived. He sat at the banqueting table in the palace of honour next to the prince. Then he was served a meal which looked absolutely delicious. But when the king came to taste it, he frowned and cried out, “This meal has no salt in it. I can’t eat it.” At once a person wearing a veil brought him salt and said, “Here you are, my king! I hope that the meal will taste better now.” The king immediately recognized her voice. The salt bearer lifted her veil and the king saw his youngest daughter.

Here is a visual depiction of the king and his three daughters story. See the video story below,

The King And His Three Daughters Story Video

Tagged with: the king and his three daughters story