The King And The Apple

This is one of the best short stories with moral values for children. There once lived a very kind and gentle King who loved God and was very fond of wise and godly men.

One day, a very wise sage came to his Kingdom and started living in a beautiful garden near a river. Every evening, the wise sage would sit with the people of the Kingdom and would talk to them and teach them lots of wonderful things. Soon, many people from the city started coming to the wise sage. On hearing this, the King too decided to visit the sage. Also, read True Friends. 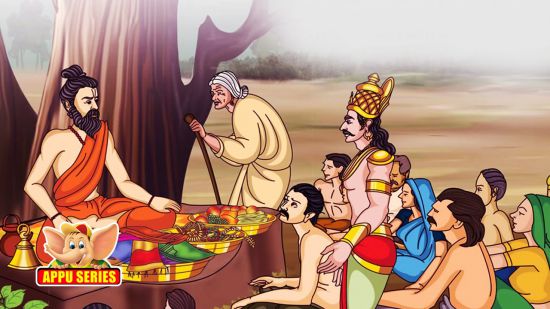 Image Source–> www.youtube.com. The next day, the King found the wise sage sitting under a large tree on a mat with a big bell next to him, talking to all the people who had come there. The King liked the talk very much and wanted to visit the sage every day.

The next day, the King filled the plate with the juiciest fruits, another plate with the prettiest clothes, and yet another with the most dazzling jewels and took them to the sage. On the way, the King came across a very hungry old woman who called out to him and said, “O, King! I have not eaten for many days. Could you please give me something to eat?” The King took an apple from the plate of fruits and gave it to the old lady.

The King went to the sage and proudly presented all the lovely gifts he had brought. The sage remained silent. Soon, the old lady arrived and made her way through the people sitting there and moved towards the sage. She came near the sage and placed an apple before him. The sage immediately picked up his bell and started ringing it.

The surprised King asked the sage, “O wise one! I offered you such wonderful gifts, yet you did not ring the bell. But when this lady offered you just one fruit, you rang the bell. I don’t understand all this!” You may also like to read, The Paper Kite.

The sage replied, “O King! It is true that you presented many lovely gifts. For a King, it is very natural. But this old woman who has been hungry for many days got just an apple and instead of eating it, she gave it to me. She gave me all that she had. What greater sacrifice can anyone give? O King, it is not the amount or cost that matters but the love and the thought behind it.”

MORAL: THE GREATEST SACRIFICE IS WHEN YOU SACRIFICE YOUR OWN HAPPINESS FOR THE SAKE OF SOMEONE ELSE.

Here is a visual depiction of one of the great short stories with moral values, “The King And The Apple”. See the video story below,