The King Who Ate Too Much

This is one of the great bedtime stories to read for kids. Long ago, in a Kingdom far, far away, there lived greedy King. Now the thing this King loved more than anything else in the whole world was food. He simply couldn’t get enough of it. Ever since he was a little prince, he had been allowed to eat whatever he wanted, whenever he wanted. And because he was always eating, he just got fatter and fatter with every day that passed.

When he became King, his appetite seemed to get even bigger! As soon as he woke in the morning, he would have his servants bring him an enormous breakfast. After eating several huge, steaming bowls of porridge, he would eat slice after slice of hot, buttered toast and jam followed by all the boiled eggs that the royal chickens could lay. In case he got a little hungry mid-morning, he would have a snack- usually, ten or more chocolate cakes washed down with as many cups of tea. Also, read The Alphabet Tree. 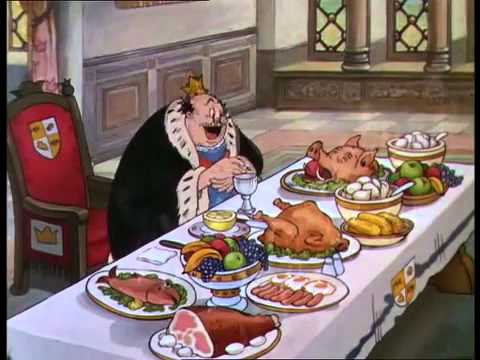 At lunchtime, the table would groan with the weight of all the pies, sandwiches, fruits, and biscuits that the greedy King was about to gobble down. For afternoon tea, it would be cakes and some more cakes. But the King’s biggest meal was supper! The royal cooks toiled for most of the day to prepare this feast. When it was time for the King to eat, one servant after another would carry in great bowls of steaming soup, plates of fish of every kind followed by huge roasts and dishes of vegetables. Down it, all went followed by fruits and jelly. At last, the King would be full and he would retire to his bed for the night.

But the King’s greedy eating habits also made him a very thoughtless King. No one dared tell him that much of the wealth of the Kingdom had to be spent on his huge meals. In the meantime, his loyal subjects were going hungry and becoming poor and needy.

One day, just after the King had eaten his usual big lunch, he began to feel very strange. Not only did he feel even bigger than usual, he also began to feel very light. Suddenly, without any warning, he started floating up from the table and into the air like a big balloon. “Help! Get me down!” he cried.

The royal courtiers and servants jumped up and down and tried in vain to grab the King as he floated upwards, but in no time at all, he had floated out of reach. Before anyone knew it, he had floated out of the castle window. Out across the royal grounds, he went, over the river and towards the woods and mountains of his Kingdom. “Wooaa-aaah!” cried the King as he disappeared from view. You may also like to read, Rip Van Winkle Story.

Next, he floated over a small village. Everywhere he looked, he saw shabby, run-down houses in need of repair and people in the streets begging for money. Every farm and every village the King floated over told the same story of hunger and misery. The King suddenly felt very sad and very ashamed. He had been so busy enjoying himself eating that he hadn’t given a thought to the plight of his subjects. While he was getting fatter and fatter, they were all getting thinner and poorer.

Now, a gust of wind was blowing the King back towards his castle. As he was passing over the castle, he suddenly felt himself falling. Down, down, he went until he landed back into the castle grounds with a great thud and a bounce.

That very day, the King sent out a royal proclamation. All his loyal subjects were to come to the castle for a huge feast, after which they could all be given a purse full of gold. As for the King, he was never greedy again. Instead of spending all his money on food for himself, he gave enough to all the people in the land so that they would never be hungry or poor again. Also, read The Flying Trunk Story.