The Lamb And The Dogs

This is one of the popular Aesop’s fables for kids. A long time ago, there lived a little lamb on a farm named Luke. Luke was very innocent and played all day long with his brother, George. But Luke was lonely and made friends with the big dogs on the farm.

“Oh, here come my friends. I have to go George!” said Luke. “Will you go with these dogs again, Luke?” asked George. “Of course, they are my friends,” replied Luke. “But Luke, they are so big and mean looking. They might take advantage of you or even harm you,” George said, trying to convince Luke. “You are unnecessarily worried. Nothing much will happen,” ensured Luke. Also, read The Wolf And The Lamb. 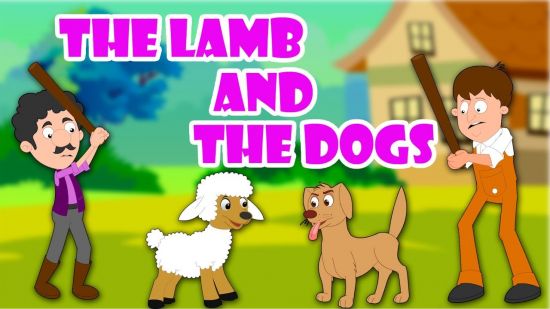 When they reached there, they saw delicious chicken and meat lying there. The dogs could not resist and immediately ran to eat all of it. They invited Luke to the feast as well. But Luke was happy to see the fresh, green grass.

As they began to eat, the two farmers heard the voice and became alert. Both of them ran towards the larder with a stick in their hands. They saw a group of dogs and started to beat them. At once, all the dogs ran away leaving behind Luke. Luke started to cry and said, “I have done nothing! I don’t eat meat. Please spare me!”

But the farmers did not listen to him and beat him to his death. The poor lamb had to suffer because of his friends’ bad deeds. You may also like to read, The Dog And The Rabbit.

MORAL OF THE STORY: CHOOSE YOUR FRIENDS WISELY.

Here is a short visual depiction of one of the popular aesop’s fables “The Lamb And The Dogs”. See the video story below,