This is an amazing kids animal story to read. In a large oak tree, there lived a squirrel. His name was Dale. He was very lazy and never wanted to work. He always wanted to sleep, then eat, again sleeps and then eat again. Whenever Dale needed food, he would steal it from other squirrel’s homes. Like this, Dale came to be known as a thief as well.

During the summer season, food is easy to get. But during the winter season, it is not easy to search for food. It snows all around and nothing grows. During winters, Dale felt very hungry. All the squirrels had worked hard during summers and had collected lots of food for winters. But Dale had only slept and collected no food at all. Also, read The Blind Vulture. 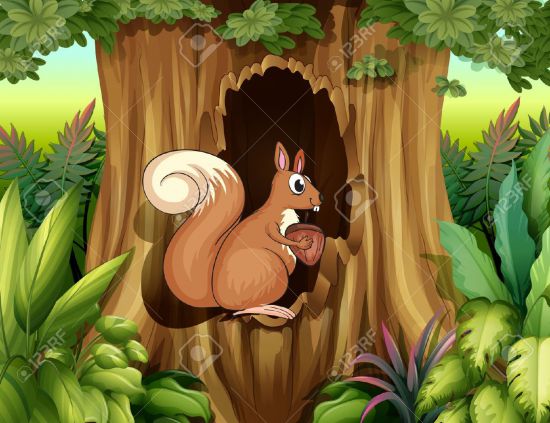 Image Source@ www.123rf.com. Now, Dale again decided to steal food. Chikky squirrel was Dale’s neighbor. She was very hard working. She had collected lots of nuts in her home. One day, while Chikky was gone for ice skating, Dale went into her house and stole three large nuts. For the next two days, Dale ate those nuts and slept.

After that, he again felt hungry. That night, when Chikky was sleeping, Dale again stole two nuts from her house. Chikky felt that her nuts were getting less in number day by day. She decided to find out that who was the thief. She applied some gum on two nuts and put them at the entrance of her door.

The next day, Dale quietly came into Chikky’s house for stealing nuts. Chikky pretended to sleep but actually, she was awake. She wanted to catch the thief who was stealing her nuts. Dale saw two nuts kept at the entrance. He picked up the nuts and ran to his house. He felt that something was wrong with the nuts. Also, read The Foolish Bear.

“Oh, God! My hands are stuck! There was gum on the nuts,” cried Dale. Just then, Chikky also came along with some other squirrels. Chikky said angrily, “Oh, so it’s you who is stealing my nuts.” Dale felt very shameful and bent down his head. All the squirrels boycotted him. The lazy and dishonest Dale got punished for his wrong doings.

MORAL: LAZINESS CAN LEAD TO DOWNFALL.