The Legend Of Man In The Moon

This is an amazing short story fairy tales for the children. Once upon a time, there lived a woodcutter named Cuoi. Also, read The Tale Of The Sun And The Moon.

One day, he took his axe into the forest in search of trees to chop down. Suddenly, he saw four tiger cubs lying dead in front of their cave. Looking down from the tree, Cuoi saw the mother hovering over her cubs. Then she went to a tree near to the one that Cuoi was hiding in, took some leaves, chewed them up and placed them in her kid’s mouths. 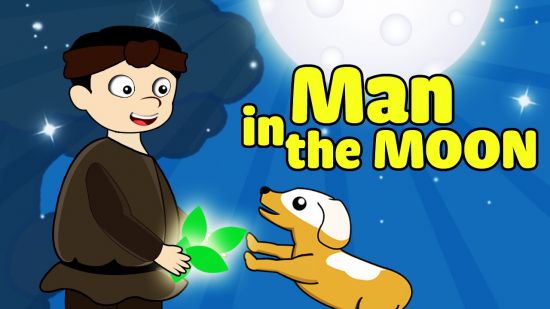 Along the way Cuoi saw an old man lying dead on the grass. He pulled some leaves off the tree, chewed them, and put it into the man’s mouth. How miraculous it was! The old man’s eyes started to open. Then, the old man said, “This is the magic banyan tree! Take good care of it and heal the world. Remember, never use dirty water on this tree, otherwise the tree will fly up into the sky.”

Cuoi brought the magical tree to his home and planted it in the corner of his garden. Every day, he watered the tree with the pure water from the well. He saved countless lives with the magical tree. Whenever he heard of someone who was seriously ill or was dying, he would rush to take some of the leaves to him.

One day, Cuoi saved the dead dog in the river. The dog who was very grateful to Cuoi, happily tagged along with him. From then on, Cuoi had another loyal friend. You may also like to read, The Moon And Her Mother.

Another day, Cuoi saved the daughter of a wealthy man in the neighboring village. The girl was grateful to Cuoi and she wanted to be his wife. From then on, the couple lived together happily and peacefully.

One day, when Cuoi wasn’t home, a band of robbers broke into his house and killed his wife. Knowing about Cuoi’s magical power, the robbers threw his wife’s intestines in a river so that he couldn’t save her. Arriving home, Cuoi found his wife long dead. He rushed to the magical tree, picked some leaves off it and started to chew. Bu no matter how much he put the chewed leaves into his wife’s mouth, he couldn’t save her without her vital organs.

Seeing Cuoi sorrowfully crying, the dog asked him to take his organs so he could put them into his wife’s stomach. Although Cuoi had never tried to replace a person’s intestines before, he took the risk anyway. Amazingly, his wife was brought back to life. Then Cuoi made a clay replica of the intestines and put them into the loyal dog’s stomach. The dog immediately came back to life again. Also, read Papa, Please Get The Moon For Me.

However his wife’s personality and actions began to change as the day passed by. When he asked her to do something, she would do something else.

One day, when Cuoi went to the forest, he told his wife to water the tree from the well. However, she didn’t do as he said, instead watering the tree with the dirty water. Immediately, the magic tree began to shake and started to lift itself up into the sky. When Cuoi came home, the tree was no longer in the ground and was already ahead above him.

Cuoi quickly grabbed the roots and tried to pull the tree back. But it continued to climb up to the sky as Cuoi clung to its roots. Soon, the whole tree was lifted into the sky along with Cuoi and it kept on going until it reached the moon. You may also like to read, The Rabbit In The Moon.

Since then, Cuoi has been living on the moon with his magical banyan tree. People also say that each year, a single leaf falls from the tree’s branches into the ocean.

Here is a short visual depiction of the short story fairy tales “The Legend Of Man In The Moon”. See the video story below,