The Legend Of Pineapple

This is The Legend Of Pineapple Story for kids. Once upon a time, there was a woman who lived with her daughter, Pina in a tiny hut in a village. They were very poor and the mother worked day and night to make both ends meet. No matter how hard she worked, she could never get any help from her daughter.

Pina was a lazy, spoilt kid who liked to play in the backyard all day. Whenever he mother asked for help, she would always find an excuse by saying she couldn’t find the object needed to complete the task. If her mother asked her to sweep the house, she would say that she could not find the broom, even if it was right in front of her. Her mother always ended up doing all the work by herself. Also, read The Legend Of The Black Sea. 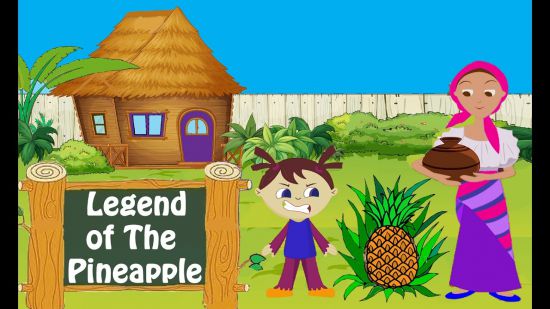 One day, her mother became very ill. She called out to Pina and said, “Pina, Come here, I am very sick. Can you cook some porridge for me? I’m so weak that I cannot get up!” Pina ignored her mother and continued to playing the backyard. “Daughter, come over here this very instant,” Pina’s mother mustered all her strength just to call her. Pina grudgingly stopped playing and went inside the house.

She poked her head into her mother’s room. “What do you want, Mama? You really expect me to cook for you? That’s too hard!” Pina protested pouting and stomped her feet. Her mother told her the recipe to cook porridge and she told her that whatever she would need was there in the kitchen. Pina reluctantly left and went to the kitchen. Her mother could hear the banging of the drawers and the cabinets.

After sometime, her mother heard her opening the back door and sneaking out into the backyard. Her mother waited and waited. Finally, she called out to Pina again. “Pina, did you cook like I told you to?” “No!” was the defined response. “Why not?” asked her mother very tiredly. “Because I couldn’t find the laddle,” said Pina. “Oh, you lazy child, you probably didn’t even look for it. What am I going to do with you, Pina? I’m so sick but I cannot even count on you,” cried her poor mother. You may also like to read, The Legend Of The Chinese Dragon.

The mother wept bitterly. In her rage, she shouted, “I wish you would grow a thousand eyes all over your head. Then, you can find what you’re looking for. Maybe then, Pina, you won’t have so many such excuses!” As soon as she said this, there was complete silence. Her mother thought, “She’s trying to be quiet so I can forget about asking her again,” she sighed.

She was hoping that Pina would come back. Realizing the wait was futile, she slowly got up to do the cooking by herself. When she looked out into the backyard, Pina was nowhere to be found. She sighed again and said, “That lazy girl must have gone to her friend’s house. She didn’t want to do any errands for me!” Exhausted, she went back to her room for a much needed rest. Weaker she was, she tried to do everything she could.

Hours passed by and then days. Still there was no sign of her wayward daughter. With a heavy heart, she thought Pina had ran away. When she recovered from her illness, the first thing she did was look for Pina. No one had seen or heard from her. It was as if she was disappeared into thin air. Also, read The Legend Of The Dream Catcher.

Months passed and still, there was no sign of her. The mother felt very bad for her angry outburst. She feared that she might never ever see her daughter again.

One day, while sweeping the backyard, where Pina used to play, she noticed a very strange plant growing at the very spot where she last saw Pina. By this time, the leaves of the plant had fully opened. Inside, she saw this very strange yellow fruit. It resembled a child’s head with a thousand eyes.

She suddenly remembered the spiteful words she had said that day. With horror, she realized in the same way, her mother’s love have spoiled her daughter. Her anger unwittingly cursed her. Somehow, her daughter had turned into this plant.

To honor the memory of her beloved daughter, she named the fruit “Pina”. She took such loving care of it like it was her own daughter. The fruit flourished so well that it bore more and more fruits. It became very popular among the villagers and the entire country. Its name later evolved to “Pimia” or “Pineapple” in English. You may also like to read, The Giant Turnip.

That’s how the Pineapple came to be according to the folklore. It was named after a very spoilt child who was cursed with a thousand eyes.

Here is a short visual depiction of the “The Legend Of Pineapple”. See the video story below,

The Legend Of Pineapple Story Video