This is one of the awesome children’s fairy tales to read. Once upon a time, there lived a man with strange eyes. One of the man’s eyes was always smiling and the other always wept. The man had three sons, though the third son was awfully foolish. All of them were curious about their father’s strange eyes.

One day, each of them asked their father about his eyes. Their father had a fit of rage and chased the eldest two sons away, without giving them an answer. But, he finally revealed the real reason to the youngest .“You are truly my son, the other two are cowards!” the father told his youngest son, who stood motionless even when his father had turned blue and purple with anger. 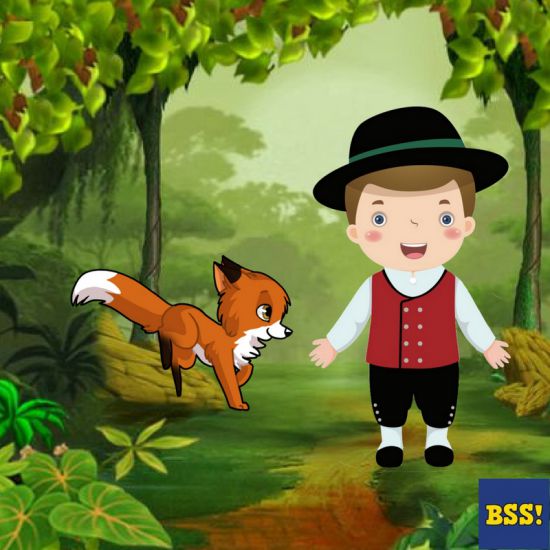 “Once, I used to have a vine of unmatched quality that gave a ton of wine in an hour,” the father spoke nostalgically. “But, while I was asleep one day someone stole it. So, the right eye smiles for I have sons like you and the other one cries for my precious treasure has been stolen.” So, the younger one narrated the story to the others.

At once, they decided to go out in search of the vine for their father. As the three sons traveled together, they came across a crossroad. There, the youngest departed towards another direction. Also read, Fox And Grapes.

On their way, the two eldest sons came across a hungry limping fox. “Please give me something to eat,” it said. The cruel brothers chased the hungry fox away without giving it anything to eat. Starved, the poor fox limped around before running into the youngest son. “I am very hungry,” the fox said.

Now, the youngest son was soft hearted, he didn’t have much, yet he shared it with the fox. After finishing the meal the fox asked the boy, “Where are you going?” The boy told him about his father’s eyes and the vine that had been stolen. Luckily, the fox knew exactly where to find it. The fox promised to take the young boy there. Upon reaching the gate of a large garden, the fox bid goodbye to the boy.

“Inside, there are twelve guards. If you catch them staring at you, you must walk fearlessly, as they are asleep. Beware when their eyes are shut, for they are wide awake. And when you reach the vine, you will find two shovels, use the wooden shovel, if you were to use the iron shovel it will make noises and get the guard’s attention,”  he warned before he limped away.

Upon reaching the vine, the boy did as the fox had directed and used the wooden shovel. Getting no results, he decided to use the iron shovel. True to the fox’s warning, the guards woke up due to the noise and captured the young boy. “Why are you trying to steal my vine, boy?” a scary looking man asked.

“But the vine is not yours. It belongs to my father,” he told the man, “and if you don’t give it back, I’ll come back and take it home!” The man thought about it for a  moment then he said, “You can take the vine, only if you bring an apple, a golden apple that bears a fruit of gold all year round.” The boy was released soon after that.

Now, the boy had no idea where would he find such an apple. He decided to look for the limping fox. Soon, he found the fox and told him what had happened.  “That’s what you get for not following advice,” he said, but then guided the boy to another garden. “When you reach the tree, that has two poles, one golden and one wooden. Use the wooden pole and you shall have what you desire.”

But when the boy reached the apple tree, he got too excited and did the opposite of what he was advised. And so the guards awoke and took the boy to their master. Now, this master had another condition to be fulfilled. “You can have the apple, only if you bring me a golden horse, that would go around the world in a day!” The young boy ran to the fox once more. The fox agreed to help him again telling him where to find the horse and to use the hempen halter instead of the golden one.

But when the boy saw the beautiful horse, he decided not to follow the limping fox’s advice. The moment the boy used the golden one, the horse neighed so loudly that the guards woke up and seized the boy once more. This time the captor demanded a golden maid if the boy wanted to take the horse. Swearing on his father’s head, the boy somehow convinced the master to lend the boy his horse.

He ran to the fox. Now, the fox was lenient when it came to others mistakes, so once again he took the boy where he could find what he sought. At the mouth of a cave, there stood the most beautiful maiden. “Are you really going to give this girl up?” the fox asked the boy. “Yes, I have sworn on my father’s head,” he replied sadly. You may also like to read, Heidi.

The fox stood beside the girl. And then, the most miraculous thing happened. The fox transformed and turned into the golden maid, leaving no difference between the two. And so, the boy went about doing the things he promised. He went back home with his father’s vine and a beautiful golden maiden. In the end, the youngest son married the beautiful maiden and the father got back his vine. Everyone lived happily ever since.

Here is a visual depiction of children’s fairy tales “The Limping Fox”. See the video story below,