The Lion And The Camel

This is one of the best Panchatantra moral stories for children. Once upon a time in a jungle lived a lion. Now, this lion was the king of the jungle. He had three assistants, the crow, the jackal and the leopard. The lion and his assistants went everywhere together and hunted together.

One day, as the four of them were looking for a prey, the lion sees a strange animal in the jungle. “Who is that?” the lion asks. So, the crow decides to fly above and ask other animals about the strange animal. Also, read The Lion In Love. 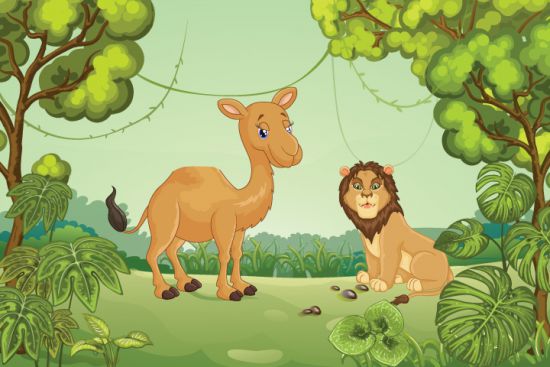 Image Source@ momjunction.com. Soon enough, the crow returns with new information. The crow then informs the others that the strange animal is a camel. Those animals are found in deserts. And the camel in their jungle had been separated from his caravan and was now lost. “I also heard that the flesh of the camel is extremely delicious.”

But the lion tells the others that the camel is not from their jungle, which makes the camel their guest. So they all agree not to kill the camel. They welcome the camel to their jungle and treat him as a guest. The camel was happy to be with them.

Then one day, while the lion fighting with an elephant, he becomes injured. As a result, the lion could not go on hunts. Because of this, the three assistants could not eat either. Then one day, the again suggest to eat up the camel. But the lion does not agree. “He does not belong to our forest. I told him that I will protect him. I cannot do this.”

Then the shrewd animals suggest that if they persuade the camel to offer himself as a meal, then would the lion eat him? The lion agreed. So, the animals that evening began to offer themselves to lion one by one. The lion refused to eat any of them. Seeing this, the camel too offered himself. He thought the lion would refuse him too. But that wasn’t the case. The moment the camel offered himself the lion at once killed it. All four of them enjoyed the camel’s meat for days. You may also like to read, Arab And The Camel.

MORAL OF PANCHATANTRA MORAL STORIES: BEWARE WHEN IN WICKED COMPANY.