The Lion And The Dolphin

One day, while the lion was strolling, he decided to walk by the seashore. As he was taking a walk at the seashore, a dolphin popped its head out of the ocean. When the lion noticed the dolphin, he stopped then and there. Also, read The Lion’s Breath. 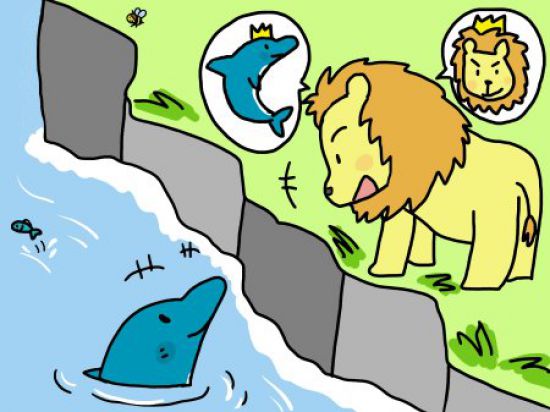 Image Source@ hukumusume.com. “Good afternoon,” the dolphin greeted the lion pleasantly. The lion did not know what to do, so he greeted the dolphin in return. Then the lion said, “Dolphin, I know that you are the king of the forest. I must let you know that I, Lion, am the king of the marine animals living in this ocean. Now, I believe that all the animals should get along well. Whether on the land or out here in the ocean.”

“So, I would suggest that we make an alliance since we both are the leaders. It should be in our best interest if both of us and the other animals became good friends,” suggested the lion. The dolphin thought about the proposal. And as far as he could think, the lion was making a good agreement. The dolphin gladly gave his consent. They both promised to help each other out in the time of need.

But the lion did not like that. “You have betrayed me and my trust,” he screamed at the dolphin. The poor dolphin could do nothing as he wasn’t made to live on the lands. So he said, “I have not betrayed you, friend. If you want to blame, someone, then blame the nature. It is nature, who made me like this. I wasn’t made to live on the lands, but only to live in the waters. There is nothing that I can do for you but to assist you from here.” You may also like to read, Monkey And The Dolphin Story.

MORAL OF FABLE STORY OF ANIMALS: SOMETIMES THE SOUL MAYBE WILLING, BUT THE FLESH MIGHT NOT.