The Lion And The Frog

This is the lion and the frog story for kids. Once upon a time, there lived a lion in the jungle. He was the King of the jungle. He had a strong and powerful voice and he roared to amuse himself and scare others. All the other animals were afraid of him. He was well aware of the every corner of the jungle and every animal and every sound in it.

The lion was very thirsty and so he went to the pond. The pond was in the middle of the forest. He used to come daily to that pond to drink some water. After that, he would take a nap under the shed of the tree for some time. This was his daily routine. You may also like, The Lion And The Mouse Story. 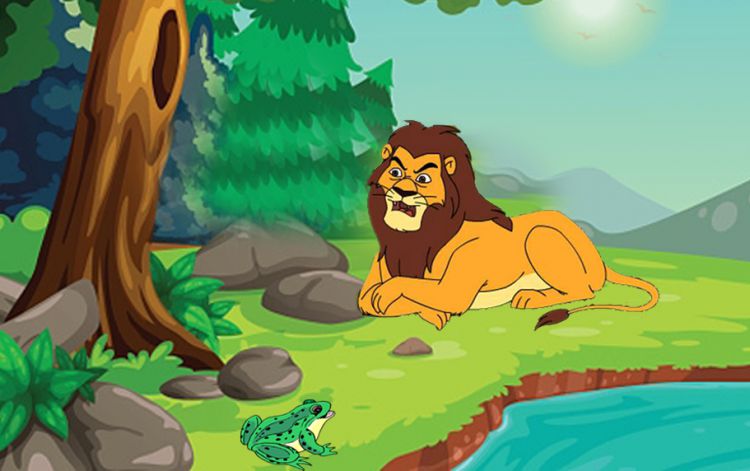 The Lion And The Frog

Image Source –> www.kidsmoralnarratives.blogspot.in. One day, the lion came to drink water and decided to sit for a while as he was very tired. As he was sound sleep, a noise was heard which he had never heard before. He was disturbed because of that voice and it awake from its sleep. He opened his eyes but he was unable to see anyone. The same voice was coming again, and again, and again. The lion trembled in fear!

The noise was continuously coming from the pond. After some time, a frog crawled out of the pond and croaked. The lion came to know that the frog had been making the noise. He roared at the frog and the frog was frightened. The lion angrily jumped onto the frog and tore it into pieces with his claws. The pitiful frog never croaked again! Also read, The Proud Lioness.

Moral Of The Lion And The Frog Story :

IT IS SILLY TO FEAR ANYTHING WITHOUT HAVING COMPLETE KNOWLEDGE ABOUT IT OR DON’T PLAY WITH YOUR LEADERS.