This is the short story of The Lion King. Long ago, in Pride Lands, in Africa, the lion king Mufasa and lion queen Sarabi, welcomed a young cub Simba. Simba was to be the next lion king. On the day of his birth, all the animals of the forest came to see him at Pride Rock, there were celebrations everywhere. And Simba, the next lion king is presented to them by Rafiki, who was the kingdom’s advisor. Later, as Simba begins to grow up, Mufasa teaches his son about the circle of life and explains his responsibilities and duties.

Now, Scar, Mufasa’s younger evil brother was jealous for he was not granted the throne. He plotted against his brother and the future lion king. One day, he tells tall tales to Simba and his betrothed Nala, coaxing them into exploring the forbidden Elephant Graveyard. Also, read Lady And The Tramp. 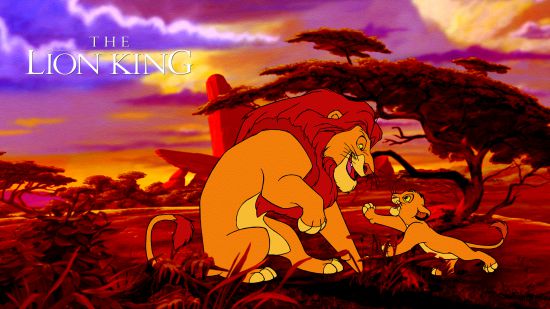 Image Source–> jackiemonster12.deviantart.com. Nala and Simba went there, but they were attacked by spotted hyenas, who were working for Scar. Zazu, who was in charge of looking after Simba saw the danger and alerted Mufasa. In the end, Zazu was ordered by Mufasa to save the two cubs. Even though Mufasa was angry with Simba for acting recklessly, he soon forgives Simba. “The old kings are always looking out for us, from above,” he tells Simba.

Scar, not happy with how things turned out, hatches another plan. This time he lures Simba to a gorge while the hyenas drive a large herd of wildebeest towards Simba’s spot. The idea was to get Simba and Mufasa crushed in a stampede. Scar, calls Mufasa, informing about Simba and the impending peril. At once Mufasa runs to save Simba. With great difficulty, Mufasa managed to save Simba, but as a result, he himself falls to his death.

Scar masterfully convinces innocent Simba that Mufasa’s death was Simba’s fault. “You must flee, Simba! If the other animals find out, you don’t even know what kind of danger you would be in. Flee!” And so, Simba runs away. “You three,” Scar orders his three spotted hyenas. “Make sure that cub does not live another day.” Scar returns to Pride Lands and tells the others of what happened and crowns himself as the king.

Meanwhile, the hyenas are unable to kill Simba. Scar becomes angry but is relieved that Simba does not return. Elsewhere, Simba collapses in a desert due to all the exhaustion and fatigue. Timon, a meerkat, and Pumba, a warthog find Simba. These two rescue him and instantly become inseparable. Simba lives and grows up in the desert, peacefully. One day, when Simba has grown into an adult, a young lioness comes to the desert in search of prey. You may like to read, Winnie The Pooh Story.

The young lioness turns out to be Nala. They reunite, spend time and fall in love. Nala then tells Simba of what has happened to Pride Lands. “Simba, you must come back,” she pleaded. “Under Scar’s reign, our home has become more of a wasteland!” Simba still felt guilty about his father’s death, he refuses Nala and runs away.

He could not bring himself to tell Nala the truth. Simba then encounters Rafiki, the old advisor. “You know not who you are, young Simba”, Rafiki tells him. That night, as Simba looked at the night sky, he was visited by his father. “Simba, this is not your rightful place,” Simba was told.

The next day, Simba decides to return home. Timon and Pumba, who had grown incredibly close to Simba, go along with him too. Simba goes to Pride Rock, where all the lions resided and confront Scar. Scar, being evil as he was, taunts Simba reminding Simba of his father’s death. As Scar and Simba fight, Scar reveals that Mufasa’s death was planned. “I killed your father, Simba”, he tells Simba.

Simba becomes engaged. He pins Scar to the ground, in order to restrain him running away and forces Scar to tell every one of his crimes. Scar breaks free and attempts to make an escape while all the others try to fend off the hyenas. Scar comes to the edge of a rock, and when he turns around he finds Simba blocking his way. Also, read Peter And The Wolf.

“My dear nephew, it wasn’t me. The hyenas forced me to do so,” the evil lion pleaded. But Simba had grown, and with age, he had become wise. He knew what Scar was capable of, so he spares Scar’s life. “Leave Pride Lands now! And make sure you never show your face here again. And if you do come back, be prepared to die!” Simba tells Scar.

Scar, still not satisfied attacks Simba. But Simba manages to throw him off the rocks, where Scar is found by the hyenas. “You betrayed us,” they tell Scar. “We heard what you told Simba”, they say. In the end, the hyenas killed scar for betraying them. With Scar gone, Simba takes his rightful place as the king. And the moment he does so, rains begin to fall over the drought-ridden lands.

A few years later, the Pride Lands become lush and green again. And once more all the animals gather around the Pride Rock as Rafiki presents Simba and Nala’s son to all the animals. You may also like to read, Tarzan Story.

Here is a short visual depiction of the “The Lion King”. See the video story below,