This is a nice story with moral for children. Long ago in a forest, there lived a lion. He was the King of the jungle. Now, his Prime Minister, the jackal was getting old and the time had come for him to choose a new Prime Minister. “Uhh! It is such a difficult task. I will set them a test,” he sighed. You may also like to read, The Lion, The Mouse, And The Cat.

The next day, the lion set out for the test. Once he had found an ax of the woodcutter in the jungle. He placed the ax in the center of the path and hid into the bushes. “Soon, I will find the right candidate for the Prime Minister’s post,” he thought to himself. The lion was quietly waiting for the other animals to pass by that way. 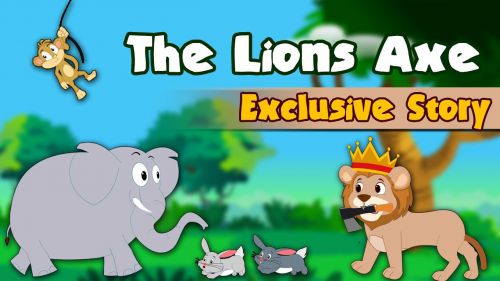 Image Source@Pinterest. Soon, a monkey passed by and he was very excited to see such a shiny thing. He thought that it was some kind of new toy. He grabbed it and threw the ax in the air like a ball. In no time, he cut his tail with the ax. The monkey cried out in pain and ran back to the mango tree. The lion was very disappointed with the monkey.

Next, a fox happened to pass by. As you know the fox is an intelligent yet cunning animal, she wanted to use it for her own benefit. “Ahh! What luck! If I take this, I will be all-powerful. I will take this ax and kill all the farmers in the village. Then, all their chickens will be fine,” thought the fox to herself. The lion heard her evil plan and pounced on her. The scared fox ran away at once.

Then, an ox was walking through the path. The ox smelled the dangerous-looking thing and he immediately got an idea. “Oh, this weapon can be useful! Up ahead, the branches of the tree are blocking the road. It’s difficult for the animals to pass. I will use this ax in cutting off the branches and clearing the roads.” He quickly took the ax in his mouth and cut down all the branches which were blocking the road. Also, read The Lion And The Mouse.

The lion was observing everything and he was amazed at the ox’ work. He realized that the monkey did not know how to use an ax. The fox wanted to use it for evil means. Only the ox uses it for the benefit of everyone. He then thanked the ox for clearing the road and offered him to become his Prime Minister. The ox accepted the offer happily.

MORAL OF THE STORY: A LEADER MUST USE HIS POWER TO HELP EVERYONE.
‘OR’ YOU SHOULD KNOW HOW TO USE THINGS BEFORE USING THEM. IT MIGHT HAVE BAD CONSEQUENCES.