This is an amazing panchtantra story for kids. Once upon a time, a dense forest was under a powerful but short tempered lion king. One day the lioness, the lion’s wife tells him, “Your breath is bad and unpleasant.” Upon hearing such a remark from his wife the lion becomes extremely embarrassed. “A king’s breath should not smell bad or unpleasant,” he thought.

To check whether his breath really smelled bad, he decided to seek the council of his councilors. Now, the king had three councilors, a sheep, a wolf and a fox. All of the king’s councilors got summoned to the king’s court at once. One by one, the lion sought their opinions. 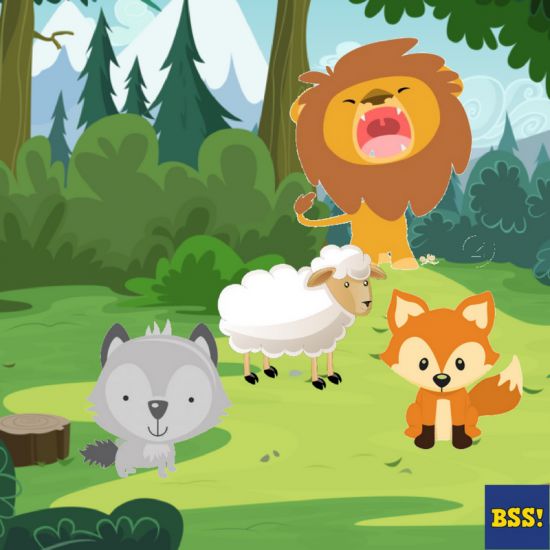 First, the sheep enters the court. “My dear little sheep,” the king asks his counselor, “tell me does my breath smell bad to you?” The sheep, a timid and honest animal replied honestly saying, “Yes, your majesty does seem to have an unpleasant breath today.” Also, read The Lion And The Boar.

Upon, hearing the sheep’s opinion, the lion is angered. As a result, he pounces on the sheep instantly killing it and then eating the sheep. Next, came the wolf’s turn. “What do you think? Do you think my breath is unpleasant?” asks the lion. Now, the wolf witnessed his colleague’s fate and did not want the same to be done to him. So, he says, “Not at all. Who says majesty’s breath smells unpleasant. To tell the truth, it smells as good as fresh roses, my majesty.” however, flattery did not save the wolf’s life.

“You fool! You dare to flatter me?” the king roars after striking the wolf dead. At last, the fox had his turn. “So, my dear counselor, do you find my breath to be unpleasant?” the king asks. The fox being known for his cunningness and extreme cleverness takes a moment to compose his answer.

Then, finally, he replies, “My majesty I am extremely sorry, I cannot answer your question. You see, I have a bad cold. Because of it that I can not smell well these days.” Thus the lion king spared the life of the fox. As soon as the lion left, the fox let out a sigh of relief. You may also like to read, The Lion And The Mouse.

Here is a visual depiction of this amazing panchtantra story, “The Lion’s Breath”. See the video story below,