This is one of the best Grimm Brothers fairy tales for kids of, “The Little Donkey“. Once upon a time, in a faraway land, there lived a King and a Queen. They had everything but they did not have a baby. Soon, the queen gave birth to a son who was actually a donkey. The queen was grieved, but the king had him raised as a Prince.

He was very fond of music. He requested the King and the Queen to let him go to the class of violin. As he grew, he learned to play the violin at which he grew skilled. Now, he was known for his music skills all over the Kingdom. 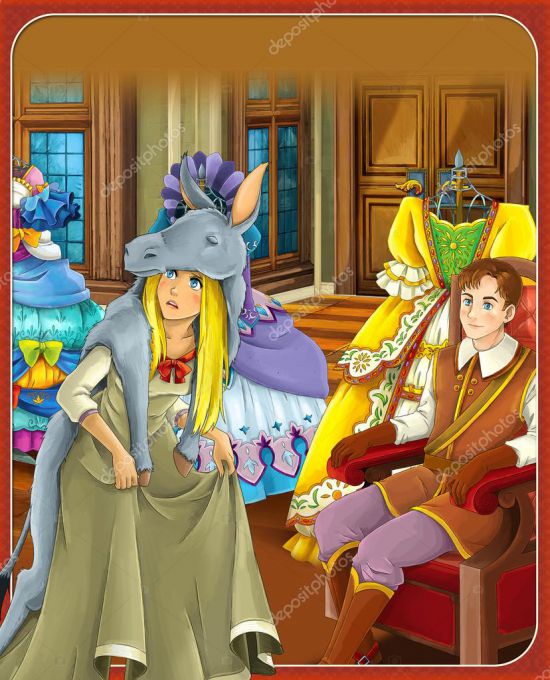 Image Source@ depositphotos.com. One day, when the Prince saw his own reflection in a pool, he grew so disturbed that he decided to wander throughout the world. As he walked for many days, he decided to take some rest. He saw a castle nearby and decided to stay there. As he entered the castle, the guards stopped him.

The Prince thought for a while and started playing violin until the king heard his music and let him in. The King’s only Princess was looking out from her window and was pleased to listen to his music. She immediately fell in love with the Prince.

The King’s only Princess was looking out from her window and was pleased to listen to his music. She immediately fell in love with the Prince. The King offered the Prince a great supper. After he had his supper, the Prince was deep in his thoughts. He was thinking about the beautiful lady whom he saw in the morning at the castle’s window. When the king questioned him, he learned that the donkey Prince wished to marry his daughter. The king agreed to his proposal.

That night, the Prince and the Princess got married and the couple was very happy. The King wanted her daughter to be safe and so, he set a servant to watch the couple. When the donkey Prince went into the bedroom, he removed his donkey skin and changed into a handsome Prince. The Princess was stunned to see him and the couple danced all through the night.

Even though he put on the donkey skin again in the morning, the daughter assured her father that she was well pleased with her bridegroom. The servant told the king what had happened the last night.