This is The Little Match Girl Story. That night was New Year’s Eve and it was terribly cold and snowy. There was a little girl who was bareheaded and with nothing on her feet, walking alone along the dark street. As she left home, she had worn slippers, which were the last thing her mother gave to her before she had died.

However, they were too large so she had lost them when she crossed the street. The first slipper was crushed by a carriage and struck to a carriage’s wheel and disappeared without a trace. The second one was picked by a naughty boy, and he threw it up in the air. He laughed and said he would keep it to make a bed for his puppy. And so, she had to walk barefoot, her feet turned red first and then blue because of the coldness.

You may also like to read, Twas The Night Before Christmas Story. 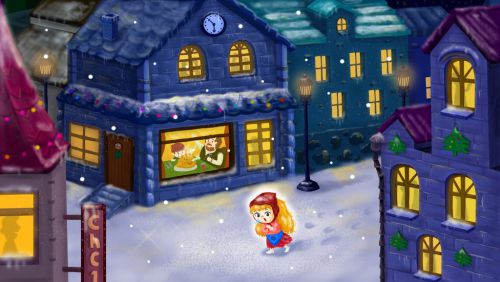 Her old apron was full of patches, and her right hand still held a bundle of them. She tried to reach a crowded place but no one noticed her and bought anything from her. During the entire day, she had not sold anything, and no one had given her a penny. The poor girl, so cold and hungry, still walked along the street with the snow falling on her head and down her back.

All the windows were lit up and there was a wonderful smell of roast goose. When her kind grandmother was alive, her family celebrated New Year’s Eve at home happily together. However, the reaper had taken her grandmother away. Her family had run out of money so she had been forced to leave her lovely house, which was decorated with beautiful climbing ivy. She now lived in a dark slum and had to listen to her father scolding her every day.

It was so cold so she sat down in a corner. She drew her little feet up close to her but it became colder and colder, and her little hands were almost numb. She could not go home as she had not sold any matches or received any money, her dad would have beaten her.

“Oh, it’s so cold! Should I burn a single match to get warmer?” she was wondering. And she dared to take one from the bundle of matches, and then she burned it. What a wonderful light it was! she thought. She was sitting before a large fireplace and the flame was dancing and warmed her delightfully. The little girl stretched out her feet warm them but the flame went out, and then the fireplace disappeared too! The poor girl held the remains of the burnt-out match and felt very sad.

Without thinking, she struck a second match. This time, the wall turned into a veil and she could see into the room. There was a table in the middle, which was full of delicious foods. The most wonderful thing was the roast goose, and it appeared to jump right out of its dish and came up to her with a knife and a fork in its back. And then, the match went out. In front of her was now a cold and thick wall.

On the street, there were some people passing by, but they didn’t notice her at all. She struck the third match. Suddenly, a large Christmas Tree appeared. Hundreds of candles were shining and twinkling beautifully on the green branches. The little girl reached both her hands towards them but all the candles flew up and turned into stars in the sky. “Oh, Maybe someone is about to pass away!” she was thinking of what her grandmother always told her before she had died: When a star falls, a good soul goes up to Heaven.

She rubbed another match against the wall, the yellow light shone around and she could clearly see her grandmother smiling at her. “Grandma, take me with you! I know you will go away when the match burns out, like the tasty roast goose and the large Christmas Tree. But, please, don’t leave me. We used to be happy and you told me that if I was a good girl, I could meet you in Heaven one day. I beg you! Please tell god that I want to follow you!” she cried. When the match burnt out, the shining mirage vanished in front of her face.

And so, one by one, she struck the whole bundle of matches. She wanted to keep her grandmother near her. The matches gave such a brilliant light that it was brighter than at midday. She had never seen how beautiful and tall her grandmother was. It was an amazing moment as her grandmother took hold of her hands and took her flying higher and higher. Neither hungriness, coldness nor sadness could threaten them now since they were with god.

The next morning, snow still covered the street but as the sun rose, it was much warmer. Children were excited when their parents let them go out to play. In the corner, leaning against the wall, sat the little girl with red cheeks and a smiling mouth. Next to her, there was a bundle of matches, which had all been burnt. She had frozen to death on New Year’s Eve. The people said, “Maybe she was trying to warm herself.” But no one knew the last magical thing she saw last night.

You may also like to read, Harry- The Happy Snowman.

DON’T FORGET TO CHECK OUT THE PRINTABLE VERSION OF THIS STORY ON PINTEREST FROM HERE.

Here is a short visual depiction of “The Little Match Girl Story“. See the video story below,