This is The Little Mermaid Story for kids. Long ago there lived a Sea King in the coral palace at the bottom of the sea. He had six mermaid daughters. While five of them were happy, his youngest princess didn’t smile even once.

The Little Mermaid loved the surface world. She would often swim up to see the blue sky and the green trees of the distant land. She felt that without the wonders of the world above she would be unhappy. Beautiful fish, shells of various sizes and shapes of the wondrous sea, failed to satisfy her. Not even stories told by her father would make her smile. 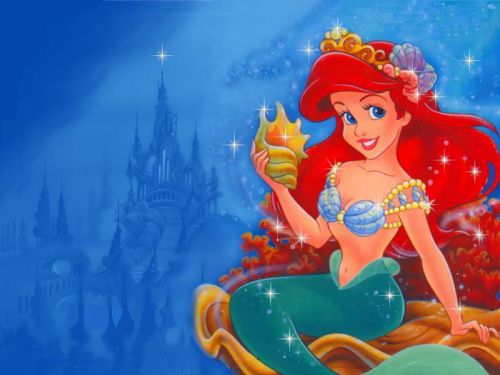 Image Source@ pinterest. One night, the Little Mermaid left her home and came to the surface, secretly. In the stormy night, the waves crashed wildly against the rocks.The lightning threw the light on a ship rolling and pitching at sea. Besides the ship, a young man was signaling for help. Little Mermaid immediately rescued him. She brought him to the shore and rested him gently against the rock. She fell in love with this young man. On seeing a beautiful young girl approaching, she left for the sea palace.

The first thing the young man saw when he opened his eyes was the beautiful girl with lovely hair. He was very grateful to her, thinking that she rescued him. The beautiful girl was the princess. Also, read Ariel Mermaid Bedtime Story.

The Little Mermaid always thought about the young man. One day she visited the Witches of the Seashore and asked her to grant a wish. She wanted to walk and dance on the land. The witch listened, stirring her portion. The witch agreed to grant her the wish on one condition. She will be able to walk and dance, but not talk and sing. She would lose the power of her speech. The Mermaid agreed and was soon transformed.

The Little Mermaid reached the royal palace hoping the prince would remember her. A grand ball was being held in the palace. Not knowing the girl, the palace guards refused to let her inside. Listening to the music coming from the palace, she started dancing merrily. Seeing her beautiful dance, the guards allowed her inside the palace.

Bright lamps lit the garden where the air was filled with music and laughter. Little Mermaid finally found the prince on the prince’s throne. Beside him, sat the beautiful princess with lovely hair. When the prince saw her, he did not realize she was his rescuer.

The king announced the princess as the future bride of the kingdom. That announcement left the Mermaid in tears. She ran out of the palace back to the sea. It is believed that the sad Little Mermaid still visits the place where she first saw the handsome prince. Also, read Ariel’s Dolphin Adventure.

Here is a visual depiction of one of the most famous short stories for kids – “The Little Mermaid Story“. See the video story below,