This is The Little Prince Summary for kids. There was once a Little Prince who lived by himself on a small asteroid called B-612. He believed that he should take care of his planet. So he always cleaned his three volcanoes and cut the baobab trees’ roots that secretly grew underground and could split the planet into pieces. Also, read The Prince With Donkey Ears.

One day, a seed mysteriously blossomed and turned into a flower. “You’re so beautiful!” he said. “I’m going to water you and protect you with this glass globe at night!” The Little Prince decided to call her Rose. He loved her very much and Rose loved her Little Prince. They were together all the time but because Rose was constantly demanding for the Little Prince’s attention, he started to doubt about her feelings for him. 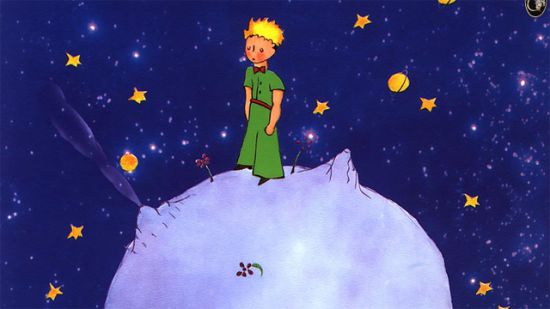 The Little Prince decided it was time for him to make new friends. So, he went on a trip around the Universe leaving the Rose behind.

On the first planet, the Little Prince found a King who had lived there on his own for many years. When he saw the Little Prince, he happily said, “Good, I’ve someone to rule now!” So, the King started to order him around and called him his subject. But the Little Prince was not used to taking orders from anyone! Friends don’t give orders anyway! So, he decided to leave. You may also like to read, Prince And Pauper.

The Little Prince continued his journey and on the next planet, he found a man, very well-dressed. The vain man said to the Little Prince, “Oh, Now I have someone to admire me!” The man dressed in all sorts of clothes and expected the Little Prince always to tell him how good he looked. But, after some time, Little Prince thought, “Friendship should not be based only on compliments!” So, he left.

On the next planet, Little Prince found an old man with lots of books around him. “What are all those books about?” Little Prince asked. “I’m a geographer!” said the old man. “So, I write about the rivers, the mountains, and the deserts. Tell me about your planet so I can write about it!” Also, read The Happy Prince.

Little Prince started talking about himself, the volcanoes, the baobab trees and of course, about his Rose. “How wonderful!” said the Geographer. “But I can only write about the things that last forever. So, I cannot write about you and your Rose.” The Little Prince had never thought that he or his Rose was not eternal and he felt sad. The Geographer had no interest in him and friends do. So, he left and traveled to a planet called Earth.

On Earth, Little Prince met a Fox and asked her, “Can we be friends?” “Only if you tame me!” the Fox replied. The Little Prince was intrigued. “What does taming mean?” he asked. “It means to establish ties, to create a bond,” the Fox said. “Otherwise, you’re just a little boy to me like thousands of other little boys and I have no need of you. And you too have no need of me for I’m just like any other Fox.” “I’m beginning to understand,” said the Little Prince. “There is a flower. I think she has tamed me. I miss her a lot!”

So, the Little Prince realized that even though his flower was so proud and temperamental, she was unique to him and a true friend. “My Rose needs me!” he thought. So, he decided to go back. Back to his volcanoes and to his baobab trees.

When the Little Prince saw her, he hugged his beautiful Rose and said, “I’m responsible and I will be with you forever!” You may also like to read, The Frog Prince.

Here is a visual depiction of “The Little Prince Summary”. See the video story below,