This is an excellent short story with moral lesson for kids, The Loyal Mongoose. In a small village, there lived a farmer with his wife and a baby son. The three of them were very happy together. One day, when he was working in the fields, the farmer found a baby mongoose. He decided to take the mongoose home with him. He wrapped it up in a piece of cloth and carried it. When he came back home, he gave it to his wife to look after.

The mongoose was a loyal pet. He would sit by the baby’s cradle all day long. But, the farmer’s wife never trusted the mongoose. She always said, “Some day that creature will harm our son.” The farmer didn’t pay any attention to what she said. 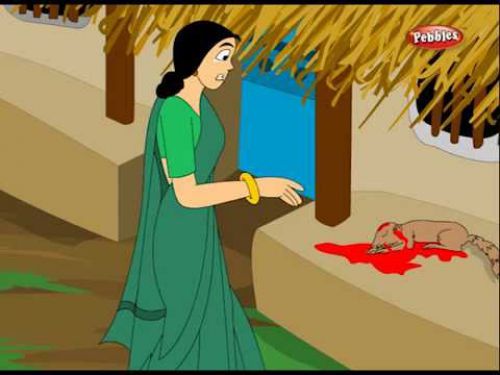 One day, the farmer’s wife was going to the market. “Look after our son. I will be out for some time and do not want to leave him alone with the mongoose,” she said. The father agreed to stay and watch over his son. After some time, one of his friends came by and convinced him to go for a walk. The farmer had nothing else to do, so he agreed.

Then, she noticed a big snake lying dead in a pool of blood. “The mongoose had killed the snake when that had come into the house,” she realized. The farmer’s wife ran out at once. “You have saved my son’s life by killing the black snake,” she cried looking at the mongoose that was now dead. She tried hard but could not revive it.

When the farmer came home, he was very upset. “How could you have been so hasty? If you had only thought to look before acting, our beloved pet would still be us,” the farmer said.