This is one of the best baby bedtime stories for children. Once upon a time, there lived a man named Alberto. Alberto was a small man who lived in a small home and owned a small store in a small village.

One day, a big man walked into Alberto’s store while holding something in his hand. Alberto asked, “Hello, Sir! Are you okay?” With a worried look on his face, the big man said, “Yes, but I need to give you this,” and then he quickly ran out the door. Alberto ran after the man but he was gone. When Alberto opened his hand to see what the man gave him, he saw something very small. It was a bean. Also, read The Magic Pot Story. 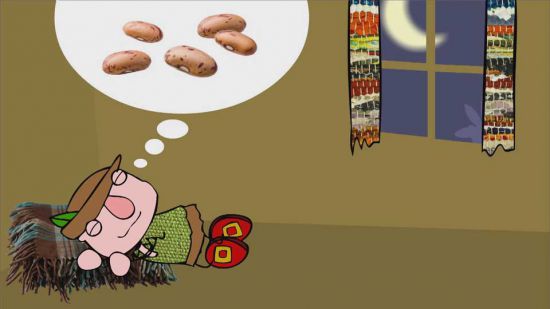 Image Source@ www.bbc.co.uk. As Alberto went inside to eat the lunch, he thought, “Why would this man give me a bean?” Alberto prepared his food and set the bean on the shelf. The bean fell into Alberto’s lunch while he was eating and he accidentally ate it. After eating all of his lunch, Alberto decided to take a nap. He got into his bed and fell fast asleep.

When Alberto woke up, he felt like something wasn’t quite right. He did not know what was wrong until he stood up and saw that he was now ten feet tall. “This is impossible! No one can grow this tall while taking a nap,” Alberto wondered. Alberto went back downstairs to his store and saw that he was still growing taller every hour. “What do I do?” he thought to himself.

By the next day, Alberto had grown so big that he couldn’t fit into his house anymore. When his friends saw him, they laughed at how tall he was and this made Alberto very sad.

The next day, two of Alberto’s friends were lost and got very hungry. The came across an apple tree and wanted to eat some of the apples, but the apples were too high to reach. Alberto was walking through the woods and saw his friends. Even though they had laughed at him earlier, Alberto decided to help them out by picking the apples off the tree and giving them to his friends. You may also like to read, The Magic Paintbrush.

His friends screamed, “Yay!” because they were now glad that Alberto was their friend. Alberto’s friends realized that everybody has their own special qualities and that it is a GOOD thing that all people are not the same.