This is one of the awesome Indian folk tales with morals for children. Bruce was a very kind man. He always helped his fellow villagers. As a result, the villagers loved and respected him. That year, there was no rain and all the fields in the village were dried up. Because of this, Bruce had suffered a huge loss.

But still, he thought about the faith of the poor farmers in the village. He decided to help all of them. He used up all of his money to feed them. Also, read The Magic Bean Story. 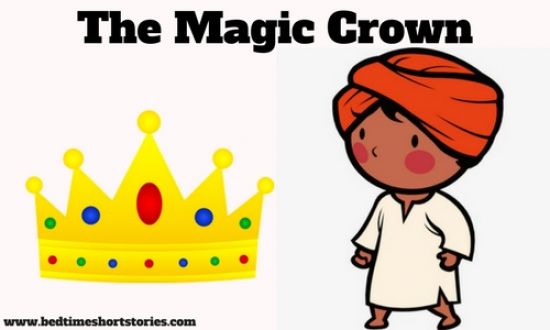 After a few days, Bruce realized that he had no money left. Soon, he decided to leave the village to seek his fortune.

He walked and walked and finally reached a temple. The temple was very crowded. The people were standing in a queue. At the front of the queue, there was a shiny pedestal. “What is happening?” asked Bruce to a person standing next to him.

“You see,” said that person pointing to the crown, “that’s a magic crown. It will glow brightly when a very kind man and a selfless person touches it. He will be the rightful owner of that crown. Go ahead! Try touching it.” “I am not interested,” said Bruce. “But why? Why don’t you touch it, Sir?” People around him persuaded him to touch it reluctantly. You may also like to read, The Magic Story.

Finally, Bruce agreed and stepped ahead to touch the magic crown. To everyone’s surprise and amazement, the crown shone brightly the moment he laid his hand on it.

Seeing this, the priest of the temple walked up to Bruce and embraced him. “You must be a very kind man. That’s why the crown has chosen you. Here, take it,” said the priest. Bruce was overjoyed. He thanked the priest and took the crown back to his village.

The crown proved to be a lucky charm. As he entered his village, the rain showered. He soon regained all his lost wealth. All the people of that village including Bruce lived happily ever after. Also, read The Magic Millstone.

MORAL OF THE STORY: KINDNESS IS A NOBLE VIRTUE. ALWAYS BE KIND TO OTHERS.