This is The Magic Pot Story for kids. Once upon a time, there lived a farmer in a village. He was very kind and diligent. The farmer brought a piece of land from a rich old man who lived next door. But there were so many stones and rocks in the field. The farmer had to go to the field early in the morning and worked very hard to pick out the stones and rocks.

One hot afternoon, the farmer was digging in the ground. All of a sudden, he struck something hard. “What is this?” he wondered. “There’s something in the ground.” He continued to dig hoping for something good! He found a huge pot. “It’s a big pot! Maybe I can use this to store some rice.” Also, read The Magic Porridge Pot Story. 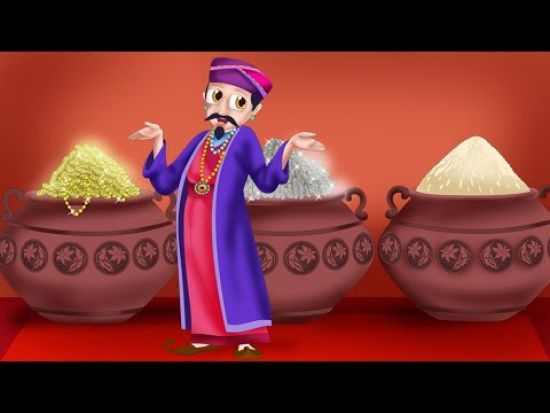 Image Source@ www.youtube.com. The farmer put some rice in it, but something strange happened the very next day. He could not believe his eyes. The pot was overflowing with rice. “Honey, look! This is a magic pot. What luck,” he called to his wife. “What luck, indeed,” she said. The farmer and his wife put a piece of bread for dinner inside the pot. He found two pieces of bread inside the pot. It was magical!

After that, the farmer put many things in it, such as copper coins, rice, and gold. With that pot, the farmer became a rich man. The rich man who lived next door heard the news about the magic pot and came over to the farmer’s house to see it. He asked the farmer to return the pot to him. “Why should I give you the pot?” the farmer asked. “I didn’t sell you the pot. I only sold you the field So, the pot is mine,” the old man answered.

The old man and the farmer argued for a while before deciding to take the matter to the King. The King was curious to know about it and he wanted the magic pot as well. “I want to know the secret of the magic pot,” he said. “It seems quite valuable. I believe it should be in the King’s treasury.” The King ordered the farmer to bring the magic pot to him. That night, the King took the magic pot to his room. He put many copper coins inside the magic pot and soon found the pot overflowing with copper coins. He was speechless. “This is a wonderful pot indeed,” he thought. You may also like to read, The Magic Paintbrush.

One day, the King’s father happened to see the pot in the room. He became curious about the pot. As he tried to look inside, he fell into the pot. “Help me!” the King’s father shouted. The King came and lifted his father out of the huge pot. As he saved his father, he saw another father asking for help. The two fathers looked exactly like each other. Each one said that he was the real father. It was impossible to tell them apart.

“This is ridiculous! He’s lying! Don’t listen to him,” the first father demanded. “Son, I’m your real father. Can’t you see?” the second father yelled. “What have I done!” the King sighed. Because of the magic pot, the greedy King ended up having to take care of two fathers, never knowing who the real one was!

Here is a visual depiction of, “The Magic Pot Story”. See the video story below,