This is one of the best bedtime stories for little kids. Every day, Matthew would rush out of school and run home as quickly as he could. Then, he used to sit down and read his favorite Kindle book called “The Magic Story”. Also, read Goldilocks And Three Bears Short Story.

But, one day, just as he begun to read it, the book started to glow brightly. With a WHOOSH, Matthew suddenly disappeared. Matthew landed with a bump near a castle. It was just like the one in the storybook. He decided to go to the castle to see what was there. 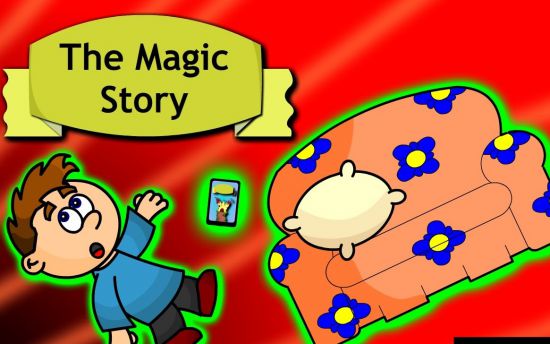 On his way, he met a girl called Goldilocks who invited him in for lunch. They both ate a large bowl of porridge until they were full. When Matthew had finished, he set off to the castle again, waving goodbye to his friend.

Matthew soon arrived at a bridge. As Matthew started to cross, a grumpy, old troll jumped out in front of him. “I’m going to eat you up!” said the troll. But then, a big billy goat appeared and knocked the troll int the water. “Thank you!” said Matthew as he waved goodbye to his new friends. You may also like to read, Jack And The Beanstalk Story.

Matthew then ran past a starting line for a race. There was a sleeping hare and a slow-paced tortoise. He was the first past the finish line. Matthew had won the race! “The castle can’t be far now,” thought Matthew.

Inside the castle, he saw a magical harp playing beautiful music and a goose who laid golden eggs. He then found a mysterious door and opened it to look inside. There, he saw a wizard and on the table was the book, “The Magic Story”. The wizard gave Matthew the book. “It’s time for you to go home,” said the wizard and zapped the book Matthew was holding. Also, read Three Billy Goats Gruff Story.

Suddenly, Matthew disappeared. Matthew found himself back at home. “It must have been a dream,” said Matthew. Matthew settled down to read his book. Again, the book started to glow. “Here we go again,” Matthew smiled. And with that, Matthew vanished!

Here is a visual depiction of one of the best bedtime stories for little kids “The Magic Story”. See the video story below,