The Man Who Didn’t Wash His Dishes

This is one of the amazing moral stories for competition . Once upon a time, there was a little man who lived alone. The man was very clean and tidy. Every night, after he cooked his dinner, he would promptly wash and clean everything by himself.

However, one night, he was feeling very tired and he thought that maybe there would be no problem if he didn’t wash the dishes. He could do it tomorrow. You may also like to read, The Boy Who Doesn’t Listen. 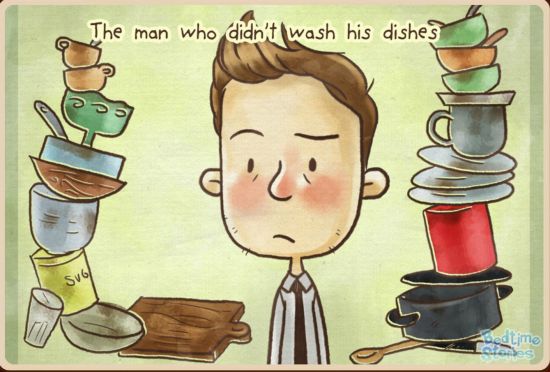 But on the next night, he was feeling even more tired. So, he decided to leave the dishwashing for the next day. The days were passing and the man was feeling more and more tired each night. His house began to stink because of the used dishes.

The days continued to pass and the sack of dishes was just getting bigger and bigger, discouraging the little man to go and wash them. Slowly, the little man ran out of crockery and cutlery. He was forced to eat his dinner from plant pots and soap dishes. And still, he felt too tired to wash his dishes.

Until, one rainy day when the little man was feeling so unhappy with his house full of dirty dishes. Finally, he decided to take an action. He took everything outside and let the rain help him wash everything! Also, read The Boy And The Drum.

All the dishes and cutlery were all washed and shiny again. He promptly returned everything to its rightful place. His house was perfect again and he was happy again. The little man learned his lesson that one must not leave his work for tomorrow.

MORAL OF THE STORY: NEVER LEAVE FOR TOMORROW WHAT YOU CAN DO TODAY!

Here is a visual depiction of one of the awesome moral stories for competition “The Man Who Didn’t Wash His Dishes”. See the video story below,